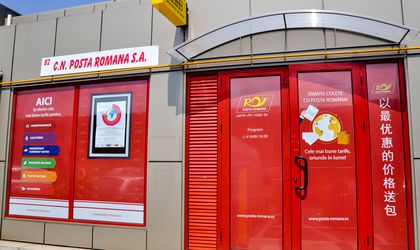 The Romanian Post opened its first postal counter dedicated to the Chinese community in Romania, shows a press release of the company.

This will bring the local Chinese community access to the Romanian postal services and products in one of the most dynamic commercial areas of Ilfov – Doraly Expo Market. In July, the counter dedicated to the Chinese community has already sent over 250 foreign parcels, 70 domestic parcels and over 400 Prioripost references.

“The idea of ​​opening the Doraly point began to take shape this spring. There is a whole community of foreigners, especially from China, in the commercial area of ​​Ilfov, who need the most diverse postal services. On the one hand, consumers with various personal needs – especially parcel transportation and money transfer – and, on the other hand, companies with business needs. We rely on the fact that we have international service at highly competitive rates, and on Romanian postal traffic figures China shows significant volumes,”said Alexandru Bratianu, head of the marketing department, Romanian Post.

The Doraly counter, belonging to the Voluntari post office, provides comprehensive services: foreign and domestic parcels, mail, money orders, online money transfer, Prioripost and paying bills. The program is from Monday to Friday from 9:00 to 4:30 pm.

In the first half of this year, about 9,850 postal parcels were sent to China using Romanian Post services, a volume 6 percent higher than in 2014 on the same segment. Nearly 1,000 parcels were sent from China to Romania. In the same interval, correspondence exits to China amounted to 1.5 tons, while inputs reached 11 tons.

The Romanian National Postal Company has become a joint-stock company in 1998, having as main stock holders the Ministry of Communications and Informational Society (75 percent) and Fondul Proprietatea S.A. (25 percent). According to their reports, they have contributed EUR 87 million to the state budget (RON 390 million), 22 percent of this sum resulting from the VAT corresponding to the various commercial contracts closed by the company during 2014.

The company has the largest nationwide distribution network, meaning over 80 percent of total operating postal subunits in Romania. Over 19 million Romanians use its mail service and over 7.5 million addresses are covered by the Romanian Post network. The company ended 2014 with a net profit of RON 22.8 million (EUR 5 million) after five years of losses.