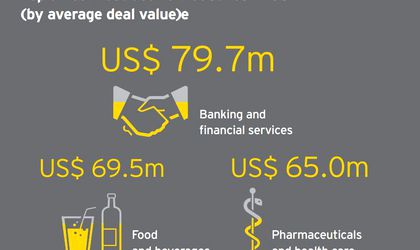 The Romanian M&A market recorded the most significant increase among the 11 countries in Central and South East Europe (CSE), with estimated total value of transactions going from USD 0.6 billion in H1 2014 to USD 2.1 billion in the first half of 2015, according to the latest study by EY, the M&A Barometer.

This spectacular rise of 250 percent year on year was mainly due to the fact that Romania also recorded the highest transaction in the CSE region this year – the acquisition of UniCredit Tiriac Bank by UniCredit SpA Italy, for over USD 770 million.

Only 8 percent of transactions made public were made by Romanian investors who acquired foreign companies – one of the lowest percentages in the region -, while the remaining 30 percent of transactions were internal M&A, in which both the buyer and the target originated in Romania. Most inbound transactions were made by investors from the United States (6) and the Netherlands (6), followed by investors from Cyprus (4), Great Britain (4), Italy (3) and the Czech Republic (3).

“Romania was confirmed as a very attractive market in the region, through both macroeconomic performance and the geostrategic position. In the future, we expect the energy sector to attract major investors through the potential of new energy sources. We expect also to a strengthening of the financial sector and increased healthcare, entering the second wave of investment,” said Florin Vasilica, transaction advisory leader of EY Romania. The market for mergers and acquisitions in the CSE region (Bulgaria, Czech Republic, Croatia, Greece, Hungary, Poland, Romania, Serbia, Slovakia, Slovenia and Turkey) grew as a whole by 2.9 percent. The number of transactions in the region increased in the first half of 2015 to 647 transactions, from 629 in H1 2014.

Investors from Western Europe and the US continued to hold the largest share in the region in the first half 2015, though the number of transactions by foreign investors was lower than the ones involving local investors.

EY employs 212,000 in over 700 offices in 150 countries and a turnover of some USD 28.7 billion in the fiscal year ended June 30 2015. EY Romania became active in 1992 and has offices in Bucharest, Cluj-Napoca, Timisoara and Iasi. Over 650 employees in Romania and Moldova provide seamless assurance, tax, transaction and advisory services business for multinational and local companies.