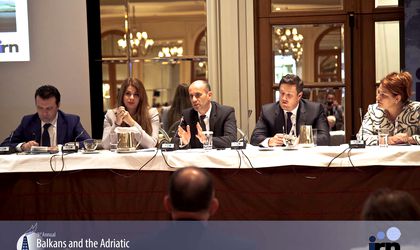 Romania’s general director oil & gas advisor of the Ministry of Energy, Corneliu Condrea, will be attending the Balkans Oil & Gas 2015 Summit as a speaker, according to the 2-day Summit agenda.

Romania’s energy resources have been always very attractive to international oil and gas companies with the Black Sea being in the spotlight. The Balkans Oil & Gas Summit is a landmark regional meeting that takes place since 2012 and last year only it gathered 300 delegates, with 70 oil and gas companies being in attendance.

The agenda breaks down focusing on the resources of each one of the countries, with the Romania section addressing what Romania can offer in terms of oil and gas exploration and production. Black Sea will also be part of the discussions, as it’s one of the most promising oil and gas ventures in Europe and Asia. The post-Summit workshop day will also include a workshop focusing on the developments in the Black Sea showcasing the prospectivity of the area.

This year’s event, originally to be held in Athens, Greece, will now be hosted in Dubrovnik, Croatia with the full support of the Croatian Ministry of Economy and the Croatian Hydrocarbon Agency to bring to the Summit’s delegation a highly valuable Balkans Summit between September 23 and 25, 2015.

Amongst the speakers of the forum will be many high profile Government Officials and C-level executives from oil and gas companies including:

Highlights of last year’s Summit can be viewed at the official YouTube Channel of the organiser, https://www.youtube.com/user/irnInternational.

More information about the Summit is available on the website: www.balkanssummit.com and released bimonthly in the Summit’s newsletter to which someone can subscribe here.