Romanian election race kicks off with promises of tax cuts 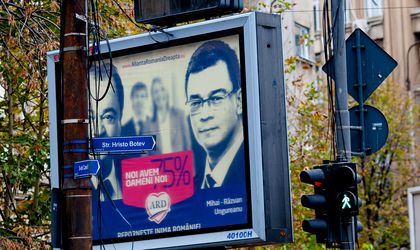 With Romania now officially in the grip of election fever, the main political coalitions, the ARD and USL, have stuffed their manifestos with fiscal measures intended to appease the private sector, such as reducing the 16 percent flat tax and cutting social contributions. But lowering taxes remains a challenge as it may create a shortfall in the budget, warn tax specialists.

Romanians will head to the polls on Decembers 9 to vote in a new set of MPs, after one month of energetic campaigning. The political parties are promising sweeping tax reforms against the backdrop of a weak domestic economy, which is tightly connected to the beleaguered Euro zone.

The center-left Social Liberal Union (USL) and the right-leaning Association for a Right Romania (ARD) set out their policies last week. Although, ideologically, the two alliances are fairly far apart, in the fiscal domain they share some common ground. Both coalitions are hoping to bring back substantial economic growth, a priority for both politicians and regular citizens.

The USL, comprised of the left-wing PSD, the Conservative Party (PC) and the Liberal Party (PNL), has been in power since May. Its government track record remains slight as the USL announced it would implement the bulk of fiscal measures after the December elections. The troika (IMF, European Commission and World Bank) has kept a watchful eye on the government during this period.

Meanwhile, the ARD, which includes the right-wing PDL, the newly formed Civil Force (FC) and the long-standing party PNTCD, is campaigning with fresh faces, having said that 75 percent of its candidates are new. The ARD’s central figures are Vasile Blaga, PDL head and former interior minister, and Mihai Razvan Ungureanu, who headed the foreign intelligence service for six years and had a short stint as PM this winter.

Victor Ponta and Crin Antonescu are the top dogs in the USL. Ponta has been PM for seven months, while Antonescu briefly held the presidential seat, after MPs suspended President Basescu, earlier this year.

The political scandal that erupted this summer between the USL and President Basescu caught Europe’s attention. The European Commission voiced its concern over the rule of law in Romania. Commissioner Jose Manuel Barrosso summoned PM Ponta to Brussels and presented him with a ten-point to-do list. The ruling coalition was urged not to encroach on the judiciary and to ease pressure on the Constitutional Court.

Romania’s impeachment referendum was subsequently ruled invalid, due to insufficient turnout, which saw President Basescu returned to office. Relations between the PM and president have remained frosty ever since. Some USL officials have suggested a further effort to get the president suspended. This would be the third attempt.

Romania’s economic situation has shifted dramatically since the 2008 elections. The economy is estimated to grow by less than one percent this year. The country had its share of austerity in 2010, which saw public sector salaries cut by 25 percent and close to 200,000 public sector redundancies. The right-wing PDL was in power at that time. It said these measures had prevented the economy from lurching out of control, Greece style.

Pundits say the difficult economic climate could be fertile political territory for a populist party such as the People’s Party – Dan Diaconescu (PP-DD), named after the businessperson and media owner. Diaconescu, who can often be seen out on the political trail in his personal helicopter or white Rolls Royce, has pledged to rid Romania of the political exploiters who are stealing the country’s wealth.

Diaconescu’s party has released an unusual 100-point manifesto. The first thing he would do if elected would be to give each Romanian citizen EUR 20,000. He promises to reduce utility bills by 35 percent and to confiscate the dubious fortunes obtained over the last two decades by people doing business with the state illegally.

Diaconescu wants to set up a Popular Court that would prosecute all politicians who have held government positions in the last two decades. Surprisingly, say pundits, his eyebrow-raising promises have gained traction. Recent polls published in the media claim the PP-DD is running third with around 15 percent of the votes, the ARD second with roughly a quarter of ballots, while the USL is set to get around 50 percent.

The leading coalitions have trumpeted fiscal measures, aiming to boost employment. The country has lost more than half a million jobs in the recession, so politicians want to trim certain taxes to stimulate job creation.

But cutting taxes can’t underpin the creation of jobs on its own, as Romania’s market potential has diminished, according to Ioana Höckl, partner at Zamfirescu Racoti Predoiu Tax.

“The reason why many companies moved their production in Romania prior to its EU accession was not necessarily the cheap labor force or low taxes but the market potential,” said Höckl. “Since this potential has only materialized to a small extent, investors’ interest has fallen.”

She predicts that this year’s level of foreign investment will be half of the investment level registered in 2005.

FDI moved up 29 percent to EUR 1.1 billion at nine months, according to central bank data.

The ARD wants to reduce the flat tax from 16 to 12 percent from next year. Romania got its flat tax in 2005, in a move to cut red tape and attract foreign investors.

The reduction of income tax on salaries by one quarter to 12 percent would add 4.7 percent to the average net salary, while a reduction by half would lead to a 9.5 percent rise, said Höckl of Zamfirescu Racoti Predoiu Tax.

“This extra money in the pockets of employees will lead to economic growth only if that money is spent. Since in times of economic uncertainty people tend to save their money rather than spend it, the state budget may end up with a loss and the economy with nothing,” warned Höckl.

Lowering the flat tax wouldn’t lead to a surge in investments on the short term and only a complete overhaul of the taxation system would stimulate the economy, according to Alin Chitu, tax senior manager at Tuca Zbarcea & Asociatii Tax.

“The 16 percent flat tax is purely theoretical: the effective rate rarely goes below 20 percent because fiscal deductibilities for a series of expenses are not granted,” said Chitu.

He considers the reduction of the flat tax to be merely an electoral promise, which hasn’t taken into account the impact on the budget.

The PDL said this measure would cost RON 2.5 billion (EUR 0.5  million) in 2013. The budget gap will be filled by the creation of new jobs, argue PDL officials.

Meanwhile, the USL plans to keep the 16 percent tax for companies and introduce a progressive taxation system for salaries. Depending on their level, salaries will be taxed by 8, 12 or 16 percent.

This measure would be implemented in the next four years. It would create a budget gap of EUR 2.4 billion if it were to be implemented immediately, according to USL officials.

Replacing the flat tax with a progressive system would increase the complexity of administering income taxes, cautions Höckl of Zamfirescu Racoti Predoiu Tax.

“This model would be the successor of the previous progressive income tax model and in the future, due to budgetary constraints, the government could easily choose to increase the level of income tax on salaries above a certain level, just by raising the level of the tax rate,” said Höckl. She added that a single income tax of 12 percent on all salaries could prove more efficient.

He adds that the impact on the labor force will be limited if the government doesn’t lower social contributions. On its own, this measure would cost RON 7.3 billion (EUR 1.7 billion), according to officials from the Ministry of Public Finance.

Both coalitions want to cut social security contributions by 5 percent in the next four years, in a move to ease the fiscal burden on bosses.

Reducing social security contribution by almost one quarter at employer level could reduce labor costs by around 4 percent, says Höckl of Zamfirescu Racoti Predoiu Tax. This would allow a company to hire a new person for every 25 employees while keeping labor costs the same.

“This measure may have a positive impact on the labor market, although generally companies hire new employees in response to the level of production and sales,” said Höckl.

Reducing contributions should come with a cap on the taxable base, which could be limited for instance to five medium wages, according to the Tuca Zbarcea & Asociatii Tax senior manager.

Politicians are also considering a hike in the minimum wage, a measure which has long been called for by trade unions.

Increasing the minimum wage would benefit people on lower incomes, but could lead to job losses in the short term, while the grey labor market may further develop, said Chitu of Tuca Zbarcea & Asociatii. Around 2.3 million Romanians were working without proper registration in Romania last year, according to a report by the Fiscal Council think-tank.

The budget revenue would be worst hit by a VAT reduction, as it generates a quarter of the fiscal collection, according Chitu of Tuca Zbarcea & Asociatii. He added that this objective could be met on the medium to long term.

“I don’t think Romania can afford a decrease in VAT revenue now, reversing the growth generated after the July 2010 hike, mainly because the cost of servicing the public debt (especially the external one) has grown exponentially in the last few years,” said Chitu.

Höckl of Zamfirescu Racoti Predoiu Tax says that VAT could be lowered to 19 percent only when the economic climate allows it. She warns that the budgetary gap in revenues due to the reduction of taxes may not be immediately plugged, although the economy is expected to grow in 2013.

“An alternative to the envisaged reduction of taxes may be a direct subsidy of job generating investment, which could boost production and economic growth,” concluded Höckl.