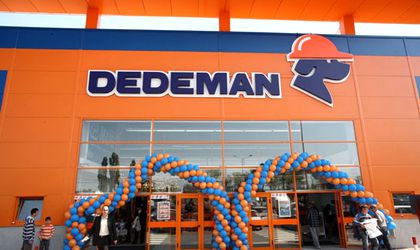 Romanian DIY retailer Dedeman will open this Friday a 15,000 sqm store in Ploiesti, some 60 km away from Bucharest. This is the 6th unit the retailer will open in 2013. Some EUR 15 million was invested in the new outlet while overall investments in expansion this year amount to EUR 73 million.

Owned by Romanian businessmen Dragos and Adrian Paval,  Dedeman now owns a network of 36 stores countrywide which range between 6,000 and 18,000 sqm. The company is the leader of the Romanian DIY market ahead of international players such as Praktiker, Bricostore, Baumax, Obi and Hornbach.

Unlike all its competitors, Dedeman has maintained a steady expansion pace over the past years. In 2012 it opened four new stores located in Constanta, Ramnicu Valcea, Slatina and Bistrita. The company has previously announced plans to reach 45 stores by 2015.

After opening 6 new stores this year, Dedeman estimates its turnover will increase by 8 percent to EUR 540 million.   In 2011 the company reported a turnover of about RON 2 billion (approximately EUR 460 million).

The other 5 new outlets opened this year are located in Galati, Miercurea Ciuc, Pitesti, Comanesti, Targu Mures. Overall, some 960 people were employed for the 6 new stores.