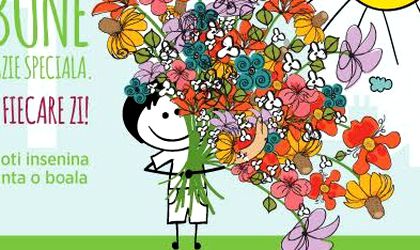 Only a fifth of Romanian companies that register profits sponsor non-governmental organizations through Law no. 32/1994, said Laszlo Bodor, communication and fundraising director for HOSPICE Casa Sperantei. The law allows companies to direct up to 20 percent of their revenue tax but no more than 0.3 percent of their turnover towards non-governmental organizations, at no other cost to themselves.

In 2014, the total sum of funds allocated to such activities was over RON 554 million (EUR 124,708,224), according to data from ANAF.  The potential sum that could be allocated for sponsorships, patronage or private bursaries if all companies were to use the sponsorship law could reach approximately RON 1,4 billion (EUR 318 million), states an analysis made by HOSPICE Casa Sperantei, EY Romania and ARC.

The event organized today included, among other things, a discussion from representatives of three Romanian NGOs, SOS Satele Copiilor, the MaiMultVerde Association and HOSPICE Casa Sperantei, regarding what the extra funds could be used for if the EUR 318 million were to be divided by three, with each receiving an equal share.

SOS Satele Copiilor, dedicated to offering housing and care services for abandoned children  but also preventing abandonment, would use the potential sum to develop a three-year long national program that would allow them to intervene in all Romanian rural communities and this would mean “helping 126,000 children at risk of being abandoned” and “eliminate the risk of abandonment for 3,000 children”, said their representative. Currently, 60-65 percent of the SOS Satelor Copiilor budget in Romania is a result of the sponsorship law, with the rest coming from donations, added their representative.

“We thought about five-year long projects that would intervene in education, awareness raising and something more concrete than that, like planting actions, and we also thought about a reforestation project for 2,000 hectares“, said Ana Maria Bogdan from the MaiMultVerde Association. They also suggested an integrated bike sharing system in twenty Romanian cities with at least three rent centers each. At the moment, “approximately 50 percent of financing comes from sponsorships” for the MaiMultVerde Association, but the 20 percent law sponsorship is used very little, added Bogdan.

HOSPICE Casa Sperantei also spoke about what they could do with the potential funds. “Having the example of the Bucharest center, we calculated how many centers we would be able to open throughout the country, taking into account that the need for what we are offering is very great and less than 7 percent of it is currently met”, said Bodor. “We could open sixteen centers of this kind in Romania and offer free services for 32,000 persons suffering from incurable illnesses throughout 12 months”, he added. “Companies are more willing to direct funds at the last moment, December is usually the high season” when funds within the provisions of the 20 percent law come in, added Bodor.

The sponsorship law has not enjoyed sufficient exposure to help direct funds from companies to non-governmental organizations throughout the two decades it has been in effect in Romania, according to the HOSPICE Casa Sperantei, EY Romania and ARC campaign. From 20 October – 20 November 2015, the three conducted research regarding level of publicity for the provisions of the sponsorship Law, but also the manner in which they have been utilized in the past 12 months by NGOs and SMEs in Romania, stated their campaign.

For a more thorough analysis of their findings, keep an eye on the Business Review website in the following days.