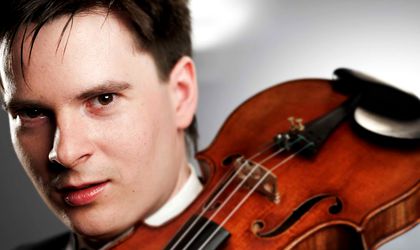 Violonist Ștefan Tarara has interpreted in the finals Tchaikovsky’s Concerto for Violin and Orchestra op.35 in D major. Daisuke Soga, the conductor of the George Enescu orchestra for this final of the violin section declared about this experience that “It was a great experience to conduct Finale of the George Enescu Competition, 2014 violin section. Congratulation to the three finalists and Stefan Tarara the first prizewinner! This was a not first time (and I hope not last time)to conduct a orchestra in such a situation, so every time I feel during competitor’s performance, their effort and their time which spend to be as a finalist of the Competition. Many years ago, I went through same situation as a competitor, still I remember such a days and stresses, fantastic feeling with the orchestra on competitions. The level of the Enescu Competition was really high, and It was a really difficult to decide ranking, but the decision of juries was as same as which I felt. But I really enjoyed the three different inspirations and passions of young competitors, only the (small) difference was the maturity about the repertory”.

Second Prize went to 22-year-old Russian Fedor Roudine, who won the Rodolfo Lipizer International Competition in September last year, and Third Prize to 27-year-old Wonhee Bae from South Korea. Winners of the Cello, Piano and Composition categories will be announced in the coming week.