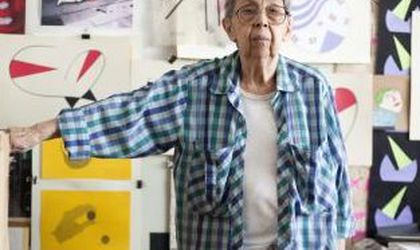 The Art on the Underground, Transport for London’s public art programme, will commission a year-long programme of women artists in 2018, which marks 100 years since the Representation of the People Act, enabling all men and some women over the age of 30 to vote for the first time. The artists represented in the London underground stations are: Linder, Njideka Akunyili Crosby, Geta Bratescu, Marie Jacotey, Heather Phillipson, Nina Wakeford.

In their official statement they notice that the programme will have mass presence across London; at street level on billboards at Brixton and Southwark, on the cover of over 25 million Tube maps, and in a hugely ambitious sculptural intervention on an 80 metre long platform at Gloucester Road Station. There are almost six million journeys taken on London Underground each day, and Art on the Underground’s 2018 programme will put women at the forefront of public space.

“In Spring 2018, for the 28th edition of the pocket Tube map, Art on the Underground have commissioned Romanian nonagenarian artist Geta Bratescu to create a new artwork, marking her first public commission in the UK. Bratescu’s extensive career has comprised drawing, collage, tapestry, photography, experimental film and performance. Having studied drawing and worked for many years as a graphic designer, her practice has a sustained engagement with the drawn line, whether through collage, a technique she calls “drawing with scissors”, in fabric, or through her meticulous draughtsmanship. Gender and motherhood are recurrent themes in Bratescu’s work, and are often explored through literary figures; she rejects the concept of feminism in favor of a celebration of femininity.”

More details about all the other artists can be found here.

In 2017, Bratescu takes part in Documenta 14, Athens and Kassel, has a solo exhibition shown at the Camden Arts Centre and then at the MSK Gent, her first New York solo show at Hauser & Wirth and represents Romania in the Venice Biennale with the solo show Apparitions, curated by Magda Radu.