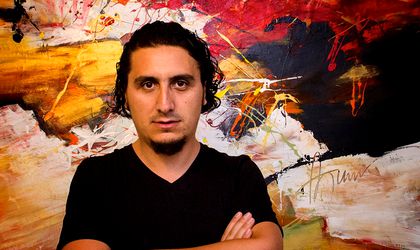 Chelsea’s Agora Gallery will feature the original work of Romanian artist Dan Bunea in Pathway to Abstraction, an exhibition that takes part of Sensorial Realms in order that the audience is reminded of the unending power of curiosity to illuminate aspects of both ourselves and our lives. The creations resonate on a visual, mental and emotional level, touching the audience in multiple and manifold ways. The artists whose works appear in Pathway to Abstraction present their individual perspectives in entertaining and energetic pieces whose considerable appeal lies in their ability to shed new light on old mysteries while leaving new secrets tantalizingly hidden.

Creating a vibrant dreamworld of unexpected horizons, Romanian artist Dan Bunea discovers a sense of place beyond what is known and touches on eternity. Inspired by Kandinsky, these paintings surge with a bold and sweeping abstraction, energized by the brilliance of rich hues and explosively energized marks. With honesty and freedom Bunea works spontaneously, applying his pigments in a variety of methods – thick and thin, textured and splattered – developing an effect that is striking in its beauty and its rawness. Bunea builds his works in acrylic paints, often incorporating three-dimensional elements to break his paintings free from the surface in a joyful outburst of color and texture.

Born in the mountains of Petrosani, Romania, Dan Bunea grew up during the overthrow of communist rule and the transition to democracy, allowing him to see the world and art from many perspectives. Now living in Timisoara, Romania and exhibiting his work internationally, he began his career working with computers and software development only to rediscover his artistic passion while traveling in Paris.