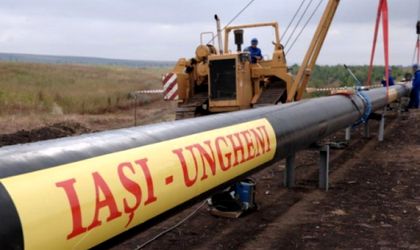 PMs Victor Ponta and Chiril Gaburici signed in Chisinau, on Thursday, a Memorandum of Understanding (MoU) between the governments of Romania and Moldova on the development of necessary projects for the network interconnection of gas and electricity in both countries.

Energy interconnection projects between Moldova and Romania, worth up to EUR 750 million, will be implemented in the period 2015-2018. EUR 421 million will be invested in Moldova. It creates preconditions for Moldova’s integration in the EU energy market.

The MoU extends the Iasi-Ungheni pipeline to Chisinau in Moldova, and to Onesti in Romania. In the energy sector the document foresees the first interconnection Isaccea – Vulcanesti – Chisinau. Subsequently, a feasibility study will be needed to begin the second interconnection. The investment projects selected will ensure the diversification of gas supply and electricity and an increasing number of alternative suppliers. In this regard a cooperation mechanism shall be established between the authorities in the two countries in order to coordinate the development of interconnection projects and the necessary steps for co-financing from the European Union.

Iasi-Ungheni pipeline, with a length of 43 kilometers, has a capacity of 1.5 billion cubic meters of gas, was inaugurated in August last year and was built in order to reduce the dependence on Russian gas delivery.

Through Budgetary Support Programme “Support to reform of the energy sector”, the European Commission allocated EUR 42.6 million to Moldova as financial support for energy diversification, connection to the EU energy market and to promote energy efficiency and renewable energy. This program is part of the five EU budget support operations worth over EUR 216 million under implementation in various sectors of national economy.

The EU has also allocated EUR 10 million to expand gas pipeline Ungheni-Iasi-Chisinau-Ungheni segment in order to ensure an alternative to gas supply in Chisinau, the largest gas consumer in Moldova.

”You should always have two sources – both gas and electricity – and choose the best, the cheapest and safest one. Romania is able, it now has the necessary resources, economic growth, our energy companies reported important profit in 2014, and we can invest in Moldova”, Victor Ponta said at a press conference.