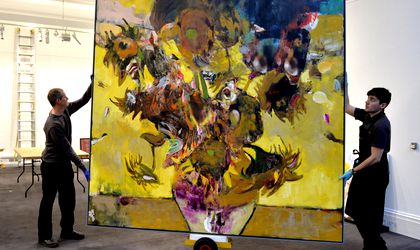 A new record was set for Adrian Ghenie when the colossal van-Gogh inspired “Sunflowers in 1937” (2014) soared over estimate to £3.1 million / $4.5 million, notes the official website of Sotheby’s auction house. The event took place last night in London, on February 10, and the amount received is more than double since the previous auction record for the artist (£1.4m set at Sotheby’s, June 2014).

According to the official press release, the pre-sale for Ghenie’s painting was estimated at £400,000-600,000. The Romanian artist had nine bidders, including Asian collectors.  The famous auction house Sotheby’s now holds the top three prices for the artist at auction.

“Tonight we saw a confident art market, punctuated by some real high-points and a depth of bidding. There was much debate about the market ahead of the sale, but in spite of the broader economy, tonight proved that collectors will always compete for works of outstanding quality and rarity”, explained Alex Branczik, Head of Contemporary Art London, quoted in the official press release.

Last night, Sotheby’s London Evening Auction of Contemporary Art realised EUR 89,827,274, while 75% of the works offered had never been on auction before and had participants from 38 countries.

Lucian Freud’s “Pregnant Girl” was the most expensive piece of art of the auction, sold for USD 23.2 million.