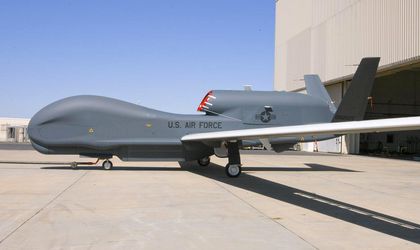 A group of 14 NATO members including Romania will buy five unmanned aerial vehicles (UAVs) that will be used for ground surveillance and intelligence missions, under the Alliance Ground Surveillance (AGS) system developed by NATO.

Northrop Grumman, the US defense contractor, will provide the drones in a deal worth EUR 1.2 billion signed during the NATO Summit in Chicago. The contract between Northrop and NATO includes the purchase and maintenance of five Block 40 Global Hawk drones equipped with a sensor that provides ground radar imagery.

Romania’s aging fleet of MIG 21 LanceRs will have to be replaced starting 2013, but the austerity budget drawn up by Romania in recent years, put this program on hold. Back in 2010, Romania planned to buy 24 second-hand  F16’s from the US for USD 800 million, but the deal failed due to lack of financing.

Romanian president Traian Basescu said, today, on his return from the summit, that the joint operation of the drones by states represents NATO’s Smart Defense concept, which allows cash-strapped members to maintain military standards by sharing the UAVs. The president said that Romanian military pilots may use foreign facilities to train in order to save money, adding that Romania’s air fleet upgrade program can accommodate 48 fighters and bombers.

“This system may not be viable in the next 30 years, but it is certainly viable during the crisis and answers the need to spend less than we did up to now on maintaining military capabilities of NATO and of member states,” commented President Basescu on the smart defense concept.  Currently, the US provides 77% percent of NATO’s budget through the national defense budget, while the EU is lagging behind.

The NATO AGS has its main operating base at Sigonella, Sicily and will be co-located with the US Air Force Global Hawks and the US Navy Board Area Maritime Surveillance UAS.

Northrop will develop the drones with EADS Deutschland, Selex Galileo and Kongsberg, while several companies such as Elettra Communications and UTI Systems will also support it.

The White House said the Libya operation highlighted intelligence, surveillance and reconnaissance shortfalls within NATO, so the recent drone deal struck by the Alliance should improve the quality of data received by military commanders.

NATO members committed during the Chicago Summit to invest over EUR 1 billion in the command, control and communications infrastructure needed to support the NATO missile defense, which should reach initial operational capability in 2015 and full operational capacity in 2018.

Romania will host key assets for the missile shield in Deveselu (Olt County), some 230 km from Bucharest. Additional assets will be hosted in Poland, Turkey and Spain. President Basescu said the missle shield assets in Romania are currently developed under a bi-lateral agreement between the US and Romania and will become operational in 2015. The shield system will gradually be transferred under the aegis of NATO.   Until the missile defense system become fully operational, US ships will guard South-Eastern Europe, partially covering the Romanian territory.

The US Embassy will organize a two-day fair in June (June 13-Bucharest; June 14- Caracal) for Romanian companies willing to develop the site infrastructure in Deveselu.