Romania should think ‘very seriously’ before joining the Euro zone 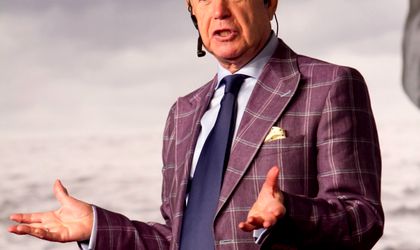 Credit risk guru Edward Altman, a professor at Stern Business School, New York University, reckons Romania should maintain an informal relationship with the Euro zone bloc, which currently has a 30 percent chance to disintegrate. He talks to BR about the lessons that rating agencies should have learned in the aftermath of the recession and about the legendary Z score he created back in the 60’s.

What is the Z score formula and how can it help companies?

The formula is called Z score and its objective is to quantify the health of a company by its probability its default. It’s based on comparison of healthy firms and bankrupt firms, looking for certain financial characteristics that differentiate good from bad firms. The measures are standard financial ratios from the balance sheet and income statements and they represent traditional measures like profitability, liquidity, leverage, debt and productivity. The unique thing about it is that we assign ratings to each of the characteristics. There are five and from these ratings you get an overall score. Then we compare what we call bond rating equivalence, in other words the average score for different bond ratings in the US, and then we look up the history of the relationship between ratings and subsequent defaults. We end up with a probability of default from these five measures combined. It’s what’s called a multi-varied approach. It’s proven to be extremely accurate over more than 45 years. It’s also available on Wikipedia, on Google Search, on a number of software programs, and the one thing I would like to caution your readers is the fact that the Z score should only be applied mainly to manufacturing companies. Then I have a second generation model called Z double prime. That is similar but it was built both for manufacturers and non-manufactures; the only thing we don’t analyze are banks, insurance companies, and financials.

Can Romanian companies use this model?

Yes, the Z double prime model is appropriate for any country, whether they would be in the US or outside, like Romania.

How did the recession impact the credit scoring industry?

The credit scoring industry, particularly the rating agencies, were one of the villains of the crisis, not because on how they rate companies but particularly how they rate derivates securities in the mortgage market, the so-called subprime mortgage market. And the rating agencies did not have very good models to assign the ratings and the probability of default and they were basing their analysis manly on the fact that real estate prices never fall. But in fact they did fall, and dramatically. Also the subprime market gave too much credit to customers who were not creditworthy and had almost no chance to repay and the rating agencies did not consider this enough. So they suffered and are still suffering from this credibility gap. However, they are very powerful and they are still in existence and will survive. The reasons is the market still would like a third party, hopefully objective and credible assessment of credit risk, but they suffered during the recession and were one of the reasons why we had this financial crisis. There are many other culprits too.

Is big data disrupting the industry?

The use of an easily available manufacturer of data is now quite available no matter where you are in the world. However, there are some companies that have utilized their knowledge of emerging companies, like ICAP ( e.n. The organizer of the Credit Risk Management Conference). ICAP is a Greek company but they have branched out to countries like Serbia, Bulgaria and Romania. They have models that also like the Z score are looking at the financial health plus they have very good data on collections and defaults in emerging markets. And through their technology and the availability of their credit bureau, they are gathering data to help the financial industry here. I would recommend where you have the resources to work with a firm like ICAP. But where you don’t or you want a second pair of eyes, calculate scores yourself using Z score, which is very easy to do and you do need data on the companies and that may be difficult to get for private companies and therefore you may have to ask them for the data that’s relevant.

We have the so-called PIIGS nations that have huge debts. How can the EU solve this issue and help the economy return to growth?

It seemed that everybody was surprised with the problems in the Euro zone starting in 2009 – 2010 but they should not have been surprised because the fundamentals for these PIIGS countries (Portugal, Ireland, Italy, Greece and Spain) were very poor even then. By the way, they are worse now than they were then even though there seems to be a calm in the financial markets in the last six months.

One of the problems in that the fundamentals are still poor. Both safety, unemployment, productivity, these are all still going in the negative direction. What we recommend is to assess the health in a different way of a country. So we have build models that leverage off or utilize some our Z score analysis in the following way: Sovereigns traditionally are evaluated based on macro-economic data. We suggest you use the macro data also, but in addition we suggest aggregating the health of the private sector to asses the health of the sovereign. For example, you could have predicted the PIIGS countries problems, with the exception of Ireland, in 2008 and 2009, even though the market was saying there’s no problem because they are members of the Euro zone and they will be bailed out.

It was only in 2010 that the market began to penalize these countries. If you had looked at the aggregate Z score of industrial and financial companies, you would have seen that these countries were considerably worse by the Z score method, by looking at the individual firms and then aggregating it, then the other countries in Europe.

In addition, there are some of the so-called stronger countries now, who themselves do not look very healthy even though they are not part of the PIIGS. The perfect example is France. France, if you aggregate the Z score, does not look very healthy at all, yet they are triple A or double A+ credit. They need to adjust the problem of the health of their private sector. After all, if you have a healthy private sector, they can pay more taxes, they can hire more workers and they can contribute to the health of the country. If the are sick, looking like themselves in distress, they won’t hire more workers, they won’t make investments and they won’t be paying taxes cause they’d be having losses. So we think you need to combine the health of the private sector with the traditional measures.

Austerity programs, while they have historically worked in some countries, are not working in Europe. I don’t mean they should be abandoned completely, you need labor reforms, to collect higher taxes but not by raising the tax rate. Cause if you raise the tax rate, particularly on companies, they are less likely to be able to be healthy and you penalize them and make them, perhaps even move elsewhere if they have the ability to do that. So rather then penalize them, nurture them. And we need stronger and better fiscal policy, more investments. Monetary policy from the European Central Bank (ECB) and the central banks has not worked very well at all. Buying programs on the part of strong governments and pumping money into the system is clearly necessary and I’ve always been against austerity in general but you do need reforms, particularly in some of these Southern European Countries like Italy, Spain, Portugal and Greece. The problem is, to be competitive you also need to have a weaker currency and they are all part of the Euro and that’s not going to happen. So, if you can’t do it by currency reform, then the only chance you have is fiscal policy.

Do you think the Euro zone project is durable?

Politically, it’s going to be very difficult for them to change. They have an emotional and a more traditional commitment to it and so it will last a lot longer and maybe survive completely than economics would imply. I believe that either the stronger countries realize they need to make not only bail out money but particularly they need to promote growth. The problem is they’re having problems in their own countries; France, Germany, the Netherlands, are all in recession or close to it. It’s very hard to get the people to agree to pump money into the so-called PIIGS countries when they’re having their own problems. Bottom line, I think the chance of the Euro zone imploding, essentially dissolving, is about 30 percent. Still it means 70 percent likelihood they’ll survive. I’m basing that on aggregating the probability of default, particularly of, I consider the most important country, Italy. Italy is the key country because they are too big to save. Not to big to fail, but too big to save.

Do you think it’s wise for Romania to join the Euro zone?

I think you’re smart to be somewhat related to the Euro zone, but the problem with joining the Euro zone is that you have almost no flexibility to compete with other countries. You would be tied to the value of the Euro. There is some relationship now but if you had real problems, my guess is the local currency would devalue but you don’t have that ability. Secondly, while there are some attractive features such as what happened when other countries joined in terms of subsidies, investments that would no longer be the case in the future because the Euro is not as strong as it was before. So I would recommend waiting to see if the Euro survives and secondly to at least think about your own flexibility should there be local problems. I mean, how can Romania compete with Spain, Italy, and Portugal among other countries? You have some very good advantages here. An educated work-force, a growing economy, a lot of people working abroad sending back money. But think about competing in the international markets; it takes more than just being small and flexible, especially if your tax rates are not very attractive and your currency is tied. I would think very seriously about joining the Euro formally. Having an informal relationship I think is the best way to go.