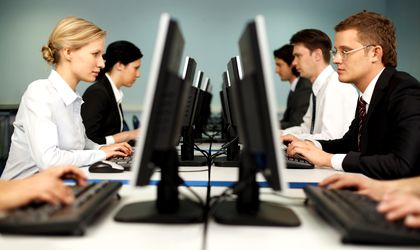 In Romania, 71.1 percent of Information and Technology (ICT) specialists in 2014 were male, registering one of the lowest shares of male ICT specialists at the EU level, next to Bulgaria (68.2 percent) and Estonia (70.4 percent), according to data published by Eurostat. The highest levels were registered in Luxembourg (89.2 percent), Cyprus (88.1 percent), the Netherlands (87.4 percent), Portugal (86.4 percent) and Italy (86.3 percent), says Eurostat.

Nearly 8 million persons were employed as ICT specialists in 2014 in the EU, “representing 3.7 percent of total employment”, with the mention that “over recent years, both the number and the share of ICT specialists in total employment have continuously increased to better adapt to an ever digitalized world”, says Eurostat. Even so, “almost 40 percent of enterprises with at least 10 persons employed which recruited or tried to recruit personnel for jobs requiring ICT specialist skills had hard-to-fill vacancies in 2014”.

According to the data, there is a gendered dimension to this profession since it is “largely made up of men, accounting in 2014 for more than 8 ICT specialists out of 10 employed in the EU (81.9 percent)”. Moreover, the majority employed were also highly educated, “with more than half (56.5 percent) of ICT specialists in the EU having a tertiary education level”, added Eurostat.

The United Kingdom was the country with the highest number of ICT specialists employed (1.49 million persons), followed by Germany (1.47 million) and France (0.91 million), the three member states accounting for almost half of all ICT specialists employed in the EU in 2014. In relative terms, Finland and Sweden recorded the highest shares of ICT specialists in total employment in 2014 with 6.7 and 6.0 percent, respectively, followed by Luxembourg (5.1 percent), Estonia and the Netherlands (both 5.0 percent), says the statistical office. Greece (1.3 percent), Bulgaria and Lithuania (1.9 percent) and Latvia (2.0 percent), on the other hand, registered the lowest proportions.

Comparing the 2014 statistics with ones from 2011, Eurostat concluded that “both the absolute number and the share of ICT specialists in total employment increased in nearly all member states by 2014, notably in Portugal, Germany, Belgium, Finland, France and Luxembourg”. This translates into an increase of almost 1.2 million ICT specialists between 2011 and 2014, with “their share in total employment [growing] from 3.2 percent to 3.7 percent”, adds Eurostat.