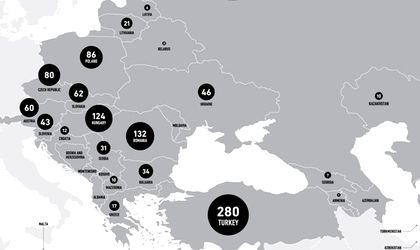 Eighteen advertising agencies from Romania, with 132 works, are taking part in the Golden Drum 2015 festival, making Romania the second country by the number of entries in the competition, after Turkey.

Golden Drum, one of the biggest and best known international advertising festivals, will take place this year in the period 13-16 of Octombrie in Portorož and Piran, Slovenia. The festival attracted 1208 works from 25 countries from the New Europe.

26 different networks submitted their entries in the Golden Drum competition, all competing for the Golden Net Award. 32 percent of all entries (396 entries) were submitted by independent agencies, bringing the overall number of entrants to 255 this year. From the 25 countries that entered the competition this year, Bulgaria has the biggest rate growth with 242 percent than last year, followed by Hungary (a growth of 221 percent), Slovenia (with 179 percent), Turkey (with 152 percent), Romania (with 150 percent), Slovakia (with 131 percent) and Austria (with 122 percent).

Golden Drum International Advertising Festival, one of the biggest advertising festivals in Europe, is a four day event, organized by the Slovenian Advertising Chamber, which offers great learning experience and career aspiration for everyone working in the creative advertising industry, granting easy access to top industry experts, unique friendship opportunities and cultural mix while remaining the best place for networking. This year’s theme of the 22nd Golden Drum International Advertising Festival, organized by the Slovenian Advertising Chamber from 13 to 16 October 2015 in Grand Hotel Bernardin in Portoroz, Slovenia, will be “Transformation, liberation and creative culture”.