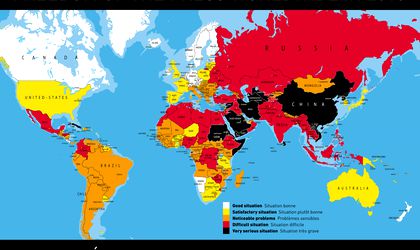 Romania ranks 42nd in this year’s World Press Freedom Index released by Reporters Without Borders. According to the organization, this year’s index is a better reflection of the attitudes and intentions of governments towards media freedom in the medium or long term.  The same three European countries that headed the index last year hold the top three positions again this year: Finland (1st, 0), Netherlands (2nd, +1) and Norway (3rd, -2). For the third year in a row, Finland has distinguished itself as the country that most respects media freedom. This year, Romania went up five positions, from 47th place obtained last year, to the 42nd place.

The questions consider six general criteria. Using a system of weighting for each possible response, countries are given a score of between 0 and 100 for each of the six overall criteria. These scores are then used as indicators in calculating each country’s final score.

Pluralism [indicator Plu] – measures the degree to which opinions are represented in the media;

Media independence [indicator Ind] – measures the degree to which the media are able to function independently of the authorities;

Environment and self-censorship [indicator EnA] – analyses the environment in which journalists work;

Transparency [indicator Tra] – measures the transparency of the institutions and procedures that affect the production of news and information;

Infrastructure [indicator Inf] – measures the quality of the infrastructure that supports the production of news and information.

The entire report can be read here.