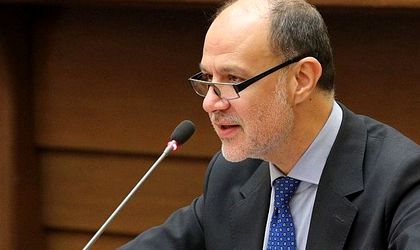 Cristian Popa has been vice-governor of the National Bank of Romania (BNR) for three mandates, holding an executive position within the institution for the longest time after Mugur Isarescu. Ioana Petrescu, former Finance Minister, had been previously proposed for the post, but renounced for lack of time.

Popa first held a BNR mandate in 1998, entering the board as the youngest member, at 34 years old. He was in charge of monetary policy, financial stability and international relations. In 2005, he introduced the inflation targeting strategy that involves BNR taking regular annual targets related to changes in the consumer price index.

Cristian Popa acted as alternate governor of Romania for the World Bank and was a member of BNR’s negotiating and dialogue team with the IMF, European Commission, World Bank, EBRD, EIB and OECD.

Popa has extensive experience in teaching and research. In 2007 he earned a PhD in economics, specializing in global economy from the Faculty of International Economic Relations of the Academy of Economic Studies. In September 1994, he obtained a scholarship from the Department of Economics at Harvard University. The former vice-governor speaks fluent English, French, Spanish and Italian.

Romania has a mandate for the European Investment Bank vice-president post from August 1, 2012, for a period of four years. The position was held by Mihai Tanasescu, former Minister of Finance, who is on extended leave since October 2014 after the National Anticorruption Agency started prosecution in the Microsoft case, involving eight other former ministers accused of bribery in one of the biggest business the local IT market. His duties were taken over by other EIB vice-presidents.

EIB is the financial institution of the European Union, whose shareholders are the 28 member states and its Governing Council comprises the finance ministers of the 28 EU countries. The institution grants loans mainly to EU countries at very favorable interest rates for investments in areas such as transport, communications, industry, agriculture, energy, education, health and SMEs.