Romania is next to last among EU members at resource productivity 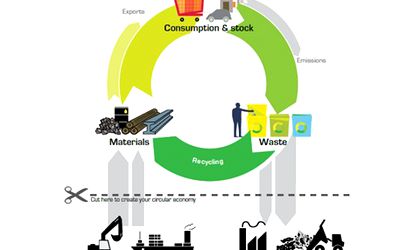 During the mentioned period, Romania, while showing an increase in GDP of 48.8 percent (registering a EUR 137.2 billion GDP in 2014), also had an important rise of 62.3 percent in domestic material consumption (having a 425.7 million tons consumption in 2014). This has brought Romania’s overall consumption productivity down by 8.3 percent.

Across the Union, after remaining relatively stable between 2002 and the beginning of the economic and financial crisis, resource productivity increased considerably from 2008 to 2010, before dropping in 2011, and growing again since then.

The study shows that the member states recording the highest increases in resource productivity were generally also those where domestic material consumption decreased the most. This was particularly the case for Spain (DMC halved between 2002 and 2014), Italy (-38.4 percent) and Ireland (-33.2 percent). Only in Bulgaria, Latvia and Poland did resource productivity improve despite a significant increase in domestic material consumption as in these three countries GDP grew even faster.

Conversely, in all member states where resource productivity decreased between 2002 and 2014, domestic material consumption significantly increased over the same period, notably in Estonia (DMC has grown by 80.6 percent between 2002 and 2014), Malta (+61.4 percent), Lithuania (+59.8 percent) and Sweden (+28.7 percent), Romania being no exception.