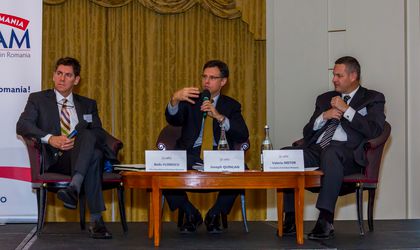 Getting the basics right

Quinlan said that foreign investors are looking for ease of doing business, strong institutions, good infrastructure and skilled labor, adding that these are some of the challenges facing Romania.

“Small countries can attract large sums of capital from multinationals. That’s how you should be thinking,” said Quinlan, who was keynote speaker at the conference, which is one of a series of events AmCham is organising to mark its 20th anniversary in Romania.

Quinlan, an American economist, is bullish about the European Union and the transatlantic relationship, arguing that the bloc of economies in the EU has emerged stronger from the global economic crisis. He authored The Case for Investing in Europe study, which was put together for the AmChams in Europe network.

The economist noted that the combined GDP of the EU 28 is around 30 percent greater than China’s and around three and a half times larger than India’s.

“On Wall Street, down in Washington, it’s all about China, India, the BRICS (e.n. a term coined to describe the emerging economies of Brazil, Russia, India, China and South Africa). Wall Street is underestimating the economic power of the EU. The EU is wealthy, while China and India are poor,” said Quinlan.

The economist underlined Romania’s good location, which he said could work as a “bridge to the Middle East and Africa”, and urged the country to go beyond the EU to increase its attractiveness to foreign investors.

“Wherever possible (e.n. look at) Ukraine, Turkey, Central Asia, the Middle East, Africa. These are emerging markets where I think Romanian companies could do business and/or attract capital (…) Romania has to broaden its scope on who wants to invest in the economy. Look at some of these Asian countries, look at Brazil,” Quinlan told BR.

He suggested companies operating in these emerging economies could use Romania as “a launch pad into the bigger EU market”.

BR asked Quinlan about the methods of attracting fresh capital investments from abroad, given that foreign direct investment (FDI) fell to a ten-year low of EUR 1.6 billion in 2012.

“The low in investment is related to the cyclical slowdown in Europe and the fact that companies have been cautious with their capital since the crisis. They’re holding back more capital because there has been a lack of global confidence amongst a lot of corporations who are holding money back,” commented the economist.

He added that Romania has to get the basics right in terms of infrastructure and the labor force, at the same time strengthening its institutions to attract investments from multinationals.

Quinlan, who is also Transatlantic Fellow at the Center For Transatlantic Relations, Johns Hopkins and the German Marshall Fund, said the US was getting more attractive as a destination for FDI, mainly due to falling energy costs and relatively stagnant wages.

“The US is becoming a low-cost manufacturing energy powerhouse and taking away capital that might otherwise have come to countries like Romania,” he added.

With Europe and the US currently negotiating a free trade agreement, Quinlan says this is the largest such deal ever attempted, highlighting that agriculture, IT, aviation, and pharmaceuticals are some of the sectors that would benefit from this partnership.

He says the Transatlantic Trade and Investment Partnership (TTIP) will have to be struck by the end of 2014, according to officials on both sides of the Atlantic. The economist predicted that this agreement would create more growth, income and jobs in both regions.

On the back of the ongoing competition for FDI, AmCham Romania launched last week an e-booklet outlining the main features of the local business environment aimed at new investors wishing to familiarize themselves with the Romanian market. This is the latest initiative of AmCham in making a strong case for Romania as an investment destination.

During the same conference, Valeriu Nistor, president of AmCham Romania, said the US and Romania were set to boost economic ties under the Strategic Partnership, which has so far focused on the military field.

“On both sides of the Atlantic there is a strong belief that the economic component of this strategic partnership must be developed further,” said Nistor.

He further outlined the leading priorities to increase Romania’s economic competitiveness as put forward by AmCham members. Recommendations span a wide array of sectors, from taxation to labor markets and the public procurement framework.