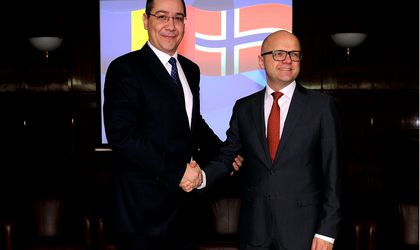 Around 50 private sector projects are about to be financed with EUR 30 million under a business development programme, managed directly by Innovation Norway, reads a press release issued by the Norwegian Embassy in Bucharest on Wednesday.

Development, implementation, investment and training related to environmentally friendly technologies, innovative green products and services, reduction and re‐use of waste are among the most common activities funded under the programme.

Also on Wednesday, the Norwegian minister for EEA and EU affairs Vidar Helgesen (photo right) paid a visit to Bucharest, having been received by prime minister Victor Ponta (photo left) who voiced the appreciation of the Government of Bucharest for the support provided by Norway through the funds within the Financial Mechanism of the European Economic Area and the Norwegian Financial Mechanism in the current financial period. The Romanian PM underscored that the promoted projects contributed to the reduction of the economic and social disparities, to the development and consolidation of some long-lasting relations between the two countries, according to Agerpres.

“The two officials discussed about the modalities to further strengthen the political and development dialogue, the bilateral economic relations, at the end of 2014 the total value of the commercial exchanges between Romania and Norway having reached EUR 675 million (with exports worth EUR 575 million and imports worth EUR 100 million),” shows a Government release quoted by Agerpres.

At the same time, Romania’s high level of absorption of Norwegian funds was highlighted.

Prime Minister Ponta also voiced the support for completing the negotiations between the EU and the EEA states — Norway for the next financial period (2014-2019), as soon as possible, in order to avoid delays.

Romania receives EUR 306 million through the EEA and Norway Grants. The funding, worth EUR 306 million for the period up to until 2016, is earmarked to support 22 programmes in areas such as the justice and home affairs sector, environmental protection, research, health, culture, civil society, and improving the social condition of the Roma population.