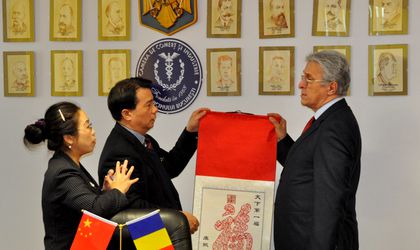 Trades between Romania and the Chinese Republic reached USD 3.4 billion in 2015, a statement by the Chamber of Commerce and Industry of Bucharest (CCIB) shows. With a 17.1 percent increase in commercial exchanges between the two countries, the Republic of China became the tenth ranking trade partner for Romania, and the first from outside Europe.

The CCIB president, Sorin Dumitriu, has met with a committee led by Zeng Wengao, head of the Longgang District Organizational Council, administrative division of Shenzhen city, China. The two parties discussed “the Chamber’s external relations strategy and the priority given to the development in economic and trade cooperation with Chinese partners since 2008,” the press release shows.