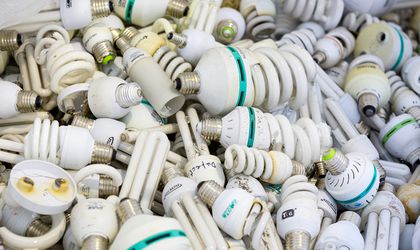 Recolamp Association, a non-profit waste management organization founded by General Electric, Osram Romania and Philips Romania, registered revenues of approximately RON 6 million in 2015, according to a press release from Recolamp. This was the result of the Green Stamp value of RON 0.85 or RON 0.75 (plus VAT), depending on the type of equipment sold by the Association’s producers.

In total, the organization collected and recycled 658 tons of lighting equipment waste, a record number for the company.

The organization represented 185 producers/importers of lighting equipment in 2015, from whom it took over the management of waste resulted from the electric and electronic equipment put on the market. As such, the association collected the 658 tons of waste from lighting fittings and sources, results based on which “Recolamp states that it has reached the European collection target of 40 percent, from the average of quantities put on the market in the last three years by the participating producers,” says the press release.

In 2015, Recolamp produced, distributed and had in use 18,000 waste collection containers at various waste generators, with the organization taking waste weighing a minimum 20 kg or 100 pieces for light bulbs and/or fluorescent lighting tubes, but also a minimum of 50 kg for lighting fittings waste.

According to current environment legislation, waste producers or individuals or companies who are in possession of waste risk fines of up to RON 40,000 “if they abandon the electrical equipment waste or do not ensure that these are recycled. Here Recolamp intervenes and, for free, takes and recycles the waste,” said Bela Kovacs, general director of the Recolamp Association.

Regarding the challenges of conducting their waste management activity in Romania, Kovacs said that “waste generators are not fully aware of the obligations they have, some producers are unwilling to take up the legal costs of protecting the environment, and the lack of concrete coercive measures applied by the state furthers the lack of performance in the waste management field. This translates into higher pollution. And the situation is much worse when we talk about lighting fittings, dangerous waste due to the mercury component,” added Kovacs.