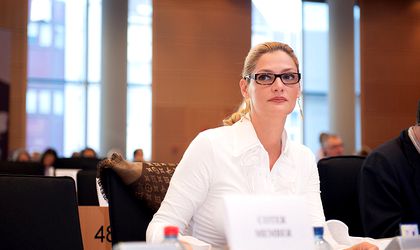 MEP Ramona Manescu took over this morning the minister of transport portfolio from PM Victor Ponta. He has been acting as interim since July 12 when the former minster, Relu Fenechiu, stepped down after he was found guilty on graft charges and sentenced to five years in prison.

Manescu was not the first nomination made by the National Liberal Party (PNL) for the position, after Fenechiu resigned. Ovidiu Silaghi withdrew his candidacy last Monday following accusations of influence peddling. Another Liberal MP, Nini Sapunaru, was also considered by the party leaders for the position.

Manescu graduated from the Law Faculty and several postgraduate programs from the National Defense College, the National School of Political Sciences and Administration and the Romanian Diplomatic Institute. Until 2007 when she became MEP, she worked as a lawyer. Manescu has been a member of PNL since 1990.

One of the main tasks ahead for the new transport minister is the privatization of CFR Marfa. Ponta asked Manescu today to call the privatization bid winner  – GFR Group controlled by Romanian railroad tycoon Gruia Stoica – to sign the sale contract and should the winner not come up with the money, a private manager will be appointed and a new bid will be organized.