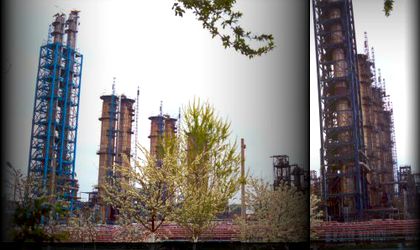 Over 1,000 employees of the Romanian Authority for Nuclear Activities (RAAN) protested on Tuesday afternoon in front of the Mehedinti Prefecture to alert authorities regarding the problems the nuclear company is facing.  The employees work for RAAN’s subsidiaries: Romag Termo (Power Plant) and Romag Prod (Heavy Water Plant). Members of the National Syndicate bloc also participated at the protest.

The Romanian Authority for Nuclear Activities has been established under Government Decision No. 365/02.07.1998 and it has as its main profile the following activities: manufacturing and trading of heavy water and of Deuterium Depleted Water; heat and electricity generation and trading; scientific research, development and designing of technologies in nuclear power field.

The company entered insolvency in September 2013 and hasn’t shown any signs of improvement. In the last couple of months, employees complained they received only half of their paychecks.

“We are afraid for our jobs, our salaries don’t come on time, we’re agraid for tomorrow. I haven’t been paid since last month when I only received half my salary and nobody knows when the rest is coming”, according to an employee quoted by Adevarul.

“The worst problems RAAN is dealing with are the following: the financial blockage the institution is currently facing that could lead to bankruptcy seeing as the State ordered a quantity of Heavy water that is curently just sitting there at the Romag Prod because the State cannot pick it up and pay for it as guaranteed. (…) Jobs should be the priority because if we close down Romag Prod then we have to eventually close Romag Termo and lose 2,500 jobs which in total means Mehedinti will wind up losing 4,000 jobs. The second problem RAAN is facing is not paying its salaries. We have to protest because if the supply of heavy water stops, that would be a catastrophe for Mehedinti”, Ion Pisc explained.

Back in september 2013, the government had decided through an emergency ordinance and through a waiver from certain legal provisions that the Autonomous Administration for Nuclear Activities (RAAN) Drobeta Turnu-Severin had become insolvent, upholding RAAN’s right to conduct its activity, to administer and use the assets it owns, Mediafax informs.

The government justified this procedure through the non-existence of a special law that would regulate the insolvency procedure in the case of autonomous administrations. The exceptional measures are also justified by the fact that RAAN Drobeta Turnu-Severin needs juridical protection, being a strategic company that operates installations and substances for the production of heavy water and related products that have a high degree of danger and complexity.

At the same time, RAAN, as a specialized economic operator, had the obligation to maintain the state stockpiles of heavy water in the quantity and quality agreed by contract, the receiver in bankruptcy not being able to denounce these contracts. For this purpose, RAAN was loaned coal and fuel oil from the state reserve.