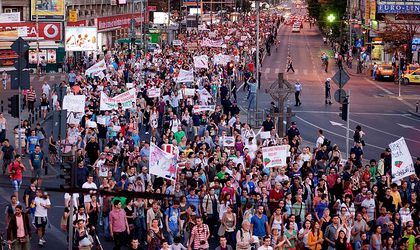 A wave of protests took place in Romania and abroad on Sunday, September 1, as thousands rallied against a bill that, if approved in Parliament, would allow Canada-based company Gabriel Resources to start exploitation of gold and silver reserves in Rosia Montana, located in Western Romania.

In Bucharest, several thousand protesters gathered at Universitate Square at 5 p.m. and occupied the street. After two hours, the protesters marched towards the government, asking others to join them along the way while chanting slogans such as ”If you care, get out of the house,” ”United, we save Rosia Montana!” ”The corporation does not make the legislation!” and ”Romania is not for sale!”

The file of protesters reached the government where they stayed for about an hour and then headed back to Universitate. The crowd sat down on the pavement, clapping their hands and chanting slogans. A few of them even set up tents and put blankets on the pavement. The protest ended at around 2.30 when protesters agreed to return for new marches the following days.

The government approved on Thursday, August 29, a bill that allows Gabriel Resources to start mining activities in Rosia Montana, putting an end to a 16-year deadlock. The Rosia Montana project was declared of public utility and of “special national interest” by the government. The mining project is estimated to generate around 2,300 jobs in the construction stage and 900 in the mining period.

MPs are set to debate the bill this autumn.

The government gave the green light after increasing its stake in the Rosia Montana Gold Corporation (RMGC) miner by five percentage points to 25 percent.

According to a draft document seen by Mediafax newswire, the building permit for the mine should be issued by year end and mining works should kick off in November 2016.

The process of gold and silver extraction will involve the use of cyanide to be stored in an artificial lake, which has drawn fierce opposition from civic rights groups and environmentalists, who are supporting the entry of Rosia Montana in the UNESCO World Heritage sites.

Environmentalists plead that the mining project would destroy four mountains as well as ancient Roman gold mines and villages. They also claim the Rosia Montana area can survive by promoting tourism and small businesses.

The civil society and the NGOS have repeatedly asked for the mining licenses in Rosia Montana to be made public, but this has not happened so far.

While the protest was organized and amply covered in the social media, some TV outlets in Romania were late to cover the march, while others got the number of participants wrong.

The international press covered the event both from the protesters’ viewpoint and the financial benefits of the mining project for the Romanian government and the Canadian company.

Thus, France 24 International News noted that “In Bucharest, between 4,000, according to the police, and 7,000 people, according to organizers walked between the central University Square and the government building, shouting slogans against a gold mine project planned by Canadian company Gabriel Resources in the village of Rosia Montana, in the heart of Transylvania.”

Reuters wrote that “in the capital Bucharest, up to 3,000 protesters marched towards the government headquarters from University Square, the scene of violent anti-austerity protests early last year that toppled a previous government.”