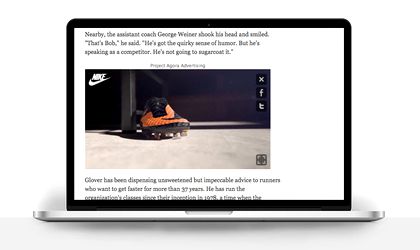 The Magic ad is a video that will appear in the middle of the article, generating elevated levels of visibility and consumer interaction.

The concept has been tested in Greece during the past few weeks with campaigns including Vodafone, the National Lottery of Greece and L’Oreal. Numbers of the testing show an 80 percent rate of visibility, while 70 percent of consumers viewed the video to end.

Project Agora has 384 partnering websites which will use the concepts starting today.

“It is known that there is not enough inventory video on the market, where pre-roll format can be delivered. Magic overcomes this limitation by delivering videos within the articles, a more generous inventory. The format has already shown it is truly magical, following campaigns conducted in Greece in beta format, and we are eager to see it ‘at work’ in Romania,” said Lucian Romascanu, country manager of Tailwind Romania.

A demonstration of the Magic format can be seen here.