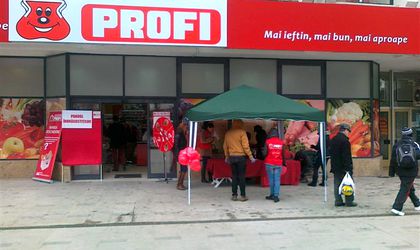 PROFI continued its sustained growth for the fourth consecutive year, ending 2013 with 1,456 mil. lei in net turnover, by 26 percent more than the previous year. A careful planning of the company’s resources is one of the key ingredients leading to this success.

“Just the same, our 2013 operating profit before depreciation went up 49% on 2012 in spite of Romania’s very difficult economic environment,” said PROFI Chief Financial Officer Dumitru Dragomir. “Yet this is not surprising since PROFI’s management focused consistently on improving the operational processes and making the network more efficient, and this now shows in our very good profitability indicators.”

Last year PROFI opened 63 new stores and plans to open at least just as many this year to continue the network’s aggressive expansion designed to bring the stores even closer to the consumer while offering them modern, civilized premises for consumption.

A reached key PROFI target was to diminish losses in the stock of products (as a result of peris and theft) by putting in place a centralized store monitoring system which improved control within the network and a cut in the spending on security.

To turn stores more productive and shopping into a more pleasant experience, PROFI designed its stores around the country to optimize the flow of stocks and make products more available at the shelf by means of an integrated planogram system.

2013 was the first year when modern retail outnumbered traditional retail, and by professing fully taxed trade PROFI contributed considerably to the pension, social security and infrastructure funds, to the quality of living in general.

With more than 5500 employees now and in excess of 6000 at the end of the year and currently operating 228 stores in 116 localities, PROFI is Romania’s second largest modern retailer.