President Iohannis: Romania has the biggest pro-American sentiment in the EU 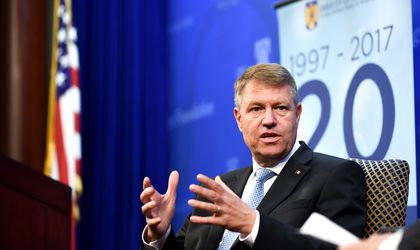 President Klaus Iohannis said during a debate organized by the Heritage Foundation in Washington that Romanians are the biggest supporters of the United States out of all the member states of the European Union.

“My country is the most pro-American out of the EU. Over 70 percent of Romanians, this is what polls show, have a positive sentiment towards the US and this is transposed in concrete actions,” said Iohannis, referring to the support that Romania has received from the US since the fall of communism.

Actually, the president spoke at a conference in the 20th anniversary of the strategic partnership between the US and Romania. Iohannis underlined the fact that trade and investments are two of the key pillars of the partnership.  The head of state cited the automotive and IT sectors as being attractive for investors. He added that Romania’s low reliance on gas imports represents another feature of the economy.

“Romania supports a tight cooperation between NATO and the EU, based on complementarity. There is not alternative to the strongest and most successful alliance in history. The EU can contribute significantly to the building of capabilities by supporting research and development activities in areas such as cyber and energy security. A more substantial engagement of European allies on common defense should not weaken the transatlantic ties,” said Iohannis.

The president went on to say that “for us, the US support means security, prosperity, freedom, democracy and the guarantee that Romania will not return in the eastern sphere of influence”.

Iohannis is set to meet with US president Donald Trump this Friday.

The Romanian community in the US comprises around 1 million people.