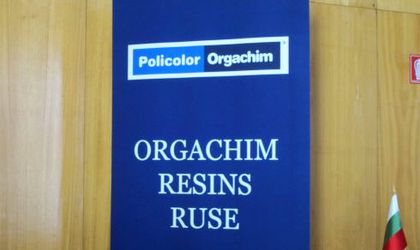 Paint and lacquer producer Policolor-Orgachim invested 3.6 million euro to re-build the resin factory in Bulgaria damaged by a fire in January 2012. The new factory opened officially on May 8.

With an annual capacity of 20,000 tons, the resin factory will supply brute matter to lacquer and paint producers as well as for companies in the auto and design industries across the European continent.

The company conducted businesses, last year, worth 25-27 million euro on the Bulgarian market, according to estimates, and is expecting an increase this year following the resin factory’s reopening

“After the 2012 fire which not only affected us but also the entire Ruse community, we come before you with good news and results. We are glad that in a relatively short time we managed the double performance of reopening an important asset and have one of the most modern units of its type in Europe”, according to Ion Florescu, president of Policolor-Orgachim’s board.

The process of rebuilding and consolidating the factory took 15 months.

“The new factory is equipped to the highest european standards. We have the most performant electrical supply installation in Bulgaria and the best set of control equipment in a factory in south-eastern Europe. The equipment allows us to control and monitor 10,000 parameters at the same time. We’ve acquired the latest fire warning system and equipment that lower technological losses”, according to Razvan Mihai Harbur, general manager for Orgachim Resins.

Orgachim Resins delivers resin to companies in Romania, Bulgaria, Greece, Serbia, Austria, France, Benelux, Italy, Hungary and the Czech republic. Established in 1901, the factory belonging to Policolor Orgachim closed down production after a fire in 2012. Production will recommence in May.