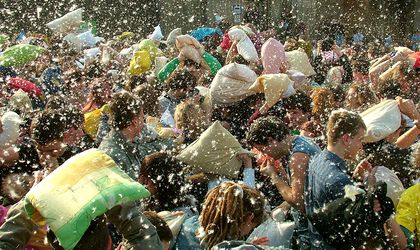 Over 40 towns worldwide will celebrate on April 5 the Pillow Fight Day, an event that gathers annually hundreds of thousands of participants. This year, Bucharest will host also the event, in the University Square, starting hour 17.00.

The initiative is called the Urban Playground Movement and their goal is to make these unique happenings in public space become a significant part of popular culture, partially replacing passive, non-social, branded consumption experiences like watching television, and consciously rejecting the blight on our cities caused by the endless creep of advertising into public space. The result will be a global community of participants, not consumers, in a world where people are constantly organizing and attending these happenings in every major city in the world.

The Romanian event is here, while more information about the Urban Playground Movement can be found here.