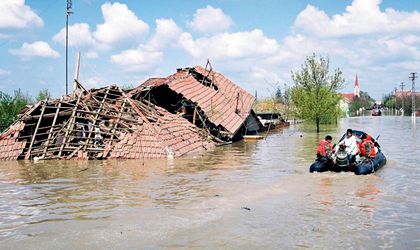 In the case of the granted damages, PAID approved for payment a total of 517 files, amounting to RON 1,208,170 (EUR 272,055). 340 files were rejected the payment from various reasons of non-compliance for compensation. The other files are in various stages of investigation.

At the end of April 2015, PAID was having a total of 1,526,902 insurance policies against natural disasters in effect, PAD, 507,521 policies having been concluded in the first four months of this year. The most diligent owners who closed a PAD compulsory insurance are the A type housing owners. Only in April they closed 76,742 policies at national level, while the B type policy owners bought only 9,191 PAD policies in the same month.

The PAD compulsory insurance policy covers three of Romania’s specific risks, earthquake, flood and landslide. The price of a policy which covers the amount of EUR 20,000 is EUR 20 per year for A type housing, namely all-brick housing, concrete or any other material resulted from heat and / or chemically treatment housing. B type buildings, respectively those made of unburnt brick or any other material not subject to heat and / or chemical treatment, can be secured through the PAD policy for EUR 10 per year for a EUR 10,000 compensation.