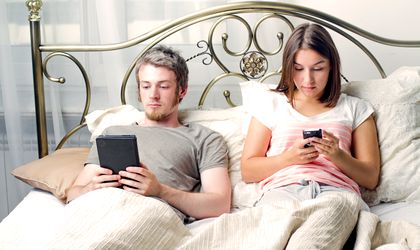 A recent study by EY shows that 62 percent of Romanian smartphone holders use the device for two to six hours daily, while two thirds check them in the morning, during the first 30 minutes after waking up.

The study called Use of mobile devices covers Romanian’s perceptions and habits in using mobile devices such as smartphones, tablets, mobile phones, smartwatches or fitness bracelets. Results say that Romanians carry their devices with them and check them often, with 41 percent of the young population (aged between 25 and 35) stating they check their phones up to 200 times a day.

Romanians use smartphones (62 percent of respondents), mobile phones (23 percent) and tablets (18 percent) between two and six hours daily. Two thirds of respondents say they check their mobile device within 30 minutes from waking up, while a 29 percentage make it a top priority, before having breakfast or washing their face.

The EY study also highlights the use of a large number of applications among Romanians, 66 percent of respondents using apps in the business category, 60 percent in the photo and video category, 46 percent in music and entertainment, with the lowest values recorded being apps in the lifestyle (28 percent), health & fitness (25 percent) and sports (17 percent) categories.

Key findings of the EY study:

The study is based on 1,040 responses to a questionnaire consisting of 33 questions received between June 8 to 29, 2015 from mostly urban respondents, aged between 18 and 55+ years in 31 counties.