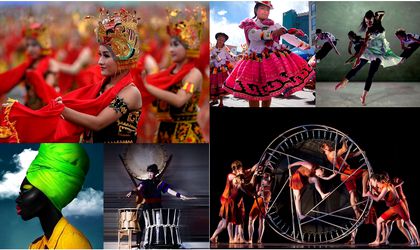 Over 50 embassies take part in “Open Your Culture” festival in Bucharest from 1 to 5 September offering cultural and artistic moments organized by over 50 embassies representing six continents, according to the festivalulambasadelor.ro website.

The exhibit offers free access and it will be open on Tuesdays and Fridays between 10:00 and 20:00. It will be composed of works of ceramics and paintings, handicrafts, antique statues belonging to the Mayan and Aztec people, cultural installations capturing various moments in people’s lives and several series of photographs.

From Tuesday to Friday, between 12:30 and 22:00 at Cinema Studio screenings of documentary and fiction films will be held, hailing from Armenia, China, Indonesia, Japan, Britain, Romania, Russia, Syria, Spain, USA, Uruguay, Venezuela, India, and the International Organization for Migration.

More than 50 artists will perform songs and dances leading viewers on a musical journey around the world. In addition, there will be several activities for children – interactive games, theatre and foreign languages workshops, creative workshops encouraging knowledge of customs and traditions of the participating countries.

The Galateca Gallery will host the exhibition “Hands of Korea: Hanbok, Bojaghi, Joomchi & Beyond” by Young Im Na, organized by the Embassy of Korea in Bucharest in celebration of the 25th anniversary of the establishment of diplomatic relations between Romania and Korea. The exhibition brings together three authentic Korean crafts – Bojaghi (traditional Korean cloth made for wrapping and decorating), Joomchi (a 1,000 years old technique of papermaking) and Hanbok (traditional Korean people clothing, a treasured tradition in Korean society for over 1,600 years) – that have survived the passage of time and are now highly relevant to new generations of contemporary artists, artisans, curators and researchers.

The Open Your Culture festival is at its first edition and will be organized by Escu, aiming to become a benchmark for the diplomatic community in the country, facilitating cultural interaction of the public in Romania with businesses and institutions, diplomatic missions and foreign communities.