Outsourcing companies span half of Romania’s office market in 2015 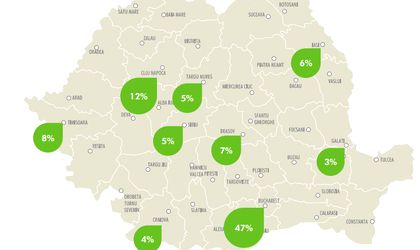 More than 50 percent of registered office sector transactions in 2015 were done by companies in outsourcing, a strong increase from the 27 percent registered in 2014, show data from a CBRE study. The total modern office stock in Romania is of 3.1 million sqm and outsourcing companies occupy more than 500,000 sqm, with Information Technology Outsourcing (ITO) leading the sector at 45 percent. Business Process Outsourcing (BPO) companies claim about 26 percent of the office stock, while Shared Service Centre (SSC) has 19 percent and Research and Development (R&D) 10 percent.

Across Romania 52 percent of outsourcing companies prefer class A premises, while class B is selected by 35 percent and class C by 13 percent. The Bucharest market is similarly structured (54 percent – class A, 30 percent – class B and 16 percent – class C), the study revealing that the class of the offices occupied by a company tends to be similar regardless of city.

The outsourcing industry in Romania employs over 67,000 people within 215 companies, occupying over half a million sqm office space within over 310 offices. Alongside software and telecom companies, outsourcing is one of the biggest employers within the white-collar segment in Romania.

More than half (47 percent) of the analyzed companies are focused on Application Development & Maintenance, followed by companies dealing with a multitude of processes, including Human Resources, Finance & Accounting, Support Services. Pure contact centers (call centers) account for 12 percent of the companies analyzed. Still, as the nature of the business entails large operations, these companies employee over 10,000 people (15 percent of total). In terms of country of origin, USA is the number 1 supplier of outsourcing companies in Romania. No less than a quarter of companies come from USA, considering that over 90 percent of the urban population in Romania speaks English.

Romania comes second, as local companies, mostly ITO’s, have grown in size and reputation, thus they have the capacity to serve international clients, on a truly global scale. Two European countries are incubators for such companies: Germany, a leader in terms of SSC’s in Romania, and France.

While ITO’s tend to be Romanian in origin, BPO’s mostly come from USA and Romania. SSC’s and R&D’s are American or German. Numerous other countries are present in Romania via outsourcing companies, as varied as Japan, Philippines, Finland, Brazil or Austria, but the total number is generally small, 1 to maximum 5 companies per country.