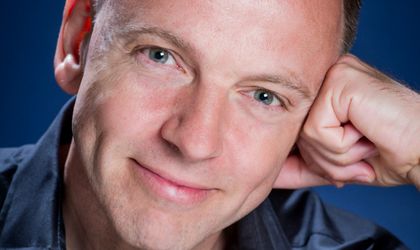 One of the hottest tickets of the year so far is Phantom of the Opera, directed by Stephen Barlow (in picture). The Australian director has returned to Romania to stage this masterpiece as a premiere for the Ion Dacian Operetta and Musical Theater, which now has its own building, after 29 years of cohabitation in various cultural centers.

Seen by over 130 million viewers worldwide, Phantom of the Opera, by Andrew Lloyd Webber, has been adapted in 14 languages and won over 70 awards. It is the most financially successful entertainment event to date.

Renowned for his original and surprising approaches, Barlow reconsidered the original script by moving the action to the first half of the nineteenth century.

“I am delighted that we can return to Bucharest to attend a cultural revolution taking place in the musical life of the capital thanks to the vision of the director general of the National Opera, Razvan Ioan Dinca. I have personally lived a romance with ‘Phantom of the Opera’ over the last 28 years, from the moment that, as a child, I saw the West End production three weeks after the world premiere,” Barlow told Mediafax. “It was then, and remains now, a haunting story, captivating and, somehow, erotic. Gaston Leroux’s story is staged with the most romantic and intimate music of Andrew Lloyd Webber. To stage a new production of the most successful entertainment show of all time is both a huge responsibility and a great opportunity. With an exceptional cast comprised of actors, pop stars and opera singers in collaboration with a team of young, but extremely talented artists from the London West End, I want to start a new path, both visually and psychologically, using the story and music. This totally new show is a tribute to Charles Garnier, the architect of the Paris Opera (Palais Garnier), where the action is set.”

According to the publication Agenda Constructiilor, the new building housing the Ion Dacian Operetta and Musical Theater was developed by Aedificia Carpati, the company responsible for the National Theater’s facelift, and which restored the auditorium and created the research center at the University Politehnica of Bucharest, among other projects. The architect is Eliodor Popa, who described the new theater as a modern construction, on a metal supra-structure. Critics responded coolly to the building, deeming the architecture unsuitable for a cultural center, owing to its warehouse aspect.

The EUR 8.7 million investment in the building – the first such designed for musical performances built in Romania since 1989 – was made with the support of the Ministry of Culture. The 6,381 sqm cultural center has three floors, 550 seats plus a lobby, bookshop store, cafe and studio especially designed for children.