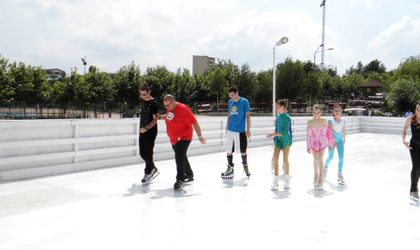 Mayor of the 4 District Cristian Popescu – Piedone has inaugurated the first synthetic and ecological ice-rink from Bucharest which is situated in Lumea Copiilor Park, Tineretului area. The surface can be used by 40-50 people simultaneously and they also hired professional ice skating coaches to help those interested to learn skating.

In order to function all seasons, the ice-rink is made by an EZ Glide 350 resin, used by the hockey teams from the United States.