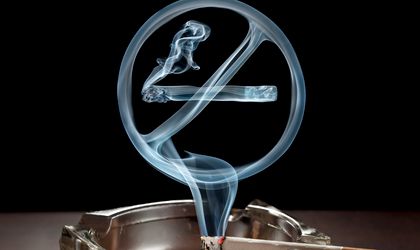 The law prohibiting smoking in closed public spaces has passed the specialty commission, with 164 votes for, 20 votes against and 26 abstains, Mediafax informs. However, the project was modified to eliminate a provision that aimed to restrict tobacco products’ display, which was heavily contested by tobacco producers.

The provision stated that tobacco products could not be displayed “in mandatory crossing places” in stores, such as cash registers. Other interdictions stayed, though, including work places, playgrounds, medical units and educational units, whether private or public. An exception is made in the case of cells for inmates in maximum security prisons.

“We have in Romania a law that is 15 years old and proved to be absolutely useless. It has not limited smoking in public places and the 72 percent of Romanians who do not smoke continue to be subject to a minority of 28 percent who smoke. It is time for Romania to enter normality and to enter among the countries that severely restrict smoking in public places,” said PNL representative Horia Cristian.

According to profit.ro website, the financial blow to the state budget could be rather significant, with the tobacco industry bringing some EUR 2.7 billion in excises, VAT, taxes and contributions. This is about 1.78 percent of GDP (GDP in 2014 was RON 674 billion) and 5.6 percent of total government revenues (RON 213 billion). Moreover, it represents about half the budget of the National Health Insurance Agency (CNAS), which stood at RON 22.9 billion (EUR 5.09 billion) in 2014.

The website states that if the law’s objective of reducing smoking by 40 percent would be attained, this would implicitly lead to a 40 percent drop in consumption, further leading to the tobacco market restriction and a drop in taxes and social contributions of some RON 4.8 billion. At the same time, health expenses that are attributable to smoking reached RON 1.2 billion in 2012. So, deducting 40 percent of these health expenses from the total drop in taxes and other contributions the sector brings, leads to a loss of some RON 4.3 billion (about EUR 1 billion) for the state budget, the website concludes.

Sanctions can reach between RON 100 and 500 for persons who do not respect the law, while firms that do not enforce it can receive fines between RON 5,000 and 15,000, and their activity can be suspended or shut down upon repeated infringements.

The law now awaits the signature of President Klaus Iohannis to come into force.