Newest round of political strife hits the economy 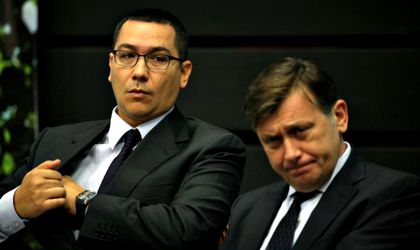 Romania’s leu depreciated against the euro by midday Thursday, amid political tensions at home and mounting violence in Ukraine, and the central bank’s reference weakened 0.7% to 4.5239 units, the lowest rate in three weeks.

The newest feud between PSD and PNL even captured the attention of the foreign press, Bloomberg writing that a “feud among Romania’s ruling coalition escalated after the two biggest parties failed to agree on cabinet changes and the smaller partner warned of a possible breakup by next week”.

Bloomberg referenced comments made by Crin Antonescu this week. The PNL president warned that next week the USL cabinet might disappear, after PSD became part of a new political coalition, USD (PSD, PC and UNPR). The new coalition made a move to investigate the Financial Surveillance Authority, a regulatory institution that is currently in the middle of a scandal.

“We’re noticing a new alliance has been formed to gradually replace the Social-Liberal union, as Ponta is building a government without the Liberals,” Antonescu said. “Monday evening, or Tuesday, Romania will have a government backed either by the current ruling coalition or by another alliance, which would lack legitimacy. We would immediately ask for that government’s resignation on those grounds.”

The PNL appointments haven’t passed the nomination stage, Ponta and Antonescu meeting on Wednesday without any result. The day after, Ponta became the interim minister of Finances, while Cristian Nita (PSD) picked-up the Economy portfolio.

Klaus Iohannis was asked on Thursday to give his input on the situation:

“Yesterday’s meeting didn’t make any steps for unlocking the crisis. I think we are at an impasse. We can’t seem to return to a smoother course and the prime-minister wanted to snatch up our colleagues vacated positions as soon as possible”, the mayor of Sibiu commented.