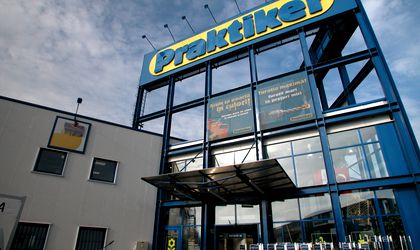 Over the next two months, new Praktiker stores will be opened in Giurgiu and Targu Jiu and the DIY retailer’s network should increase from 27 outlets at present to 45 in two years’ time, Omer Susli, the businessman who took over the local Praktiker business this February, told BR.

After five consecutive years of falling sales in Romania, the local Praktiker network wants to recover its losses by the end of 2014, said its new owner. The local businessman, who controls several other companies active in the construction field, took over the 27 Praktiker branches in Romania this February from the insolvent Praktiker AG.

“Over the past three months Praktiker has reported profit, and by the end of the year we will recover, I hope, all of the losses,” he told BR. This is the result of several changes to the retailer’s strategy. Among other things, these include the introduction of new products and product categories and customized offers and price cuts for loyal customers. “The new Praktiker will be a customer-driven store. Right now customers want a good price-quality ratio,” said the businessman. The entire repositioning campaign should start bearing results by yearend, Susli believes.

Last year, the firm reported sales of approximately EUR 130 million and a EUR 16.3 million net loss. This is less than half the level it reported in 2008.

The German retailer has been present in Romania since 2002 and saw its sales peak at EUR 292.4 million in 2008 with a network of 25 outlets. As market conditions worsened and competition increased over the following years, the retailer saw sales drop and losses increase.

Though the market is showing no sign of an upturn, Susli is confident in what the future holds for Praktiker. He has no plans to close down any of the 27 branches and, moreover, is planning to open new ones. “We want to increase the profitability of the existing stores and more than that, over the next two years we want to expand the network to 45 outlets. In less than two months we will open stores in Giurgiu and Targu Jiu,” he said.

The businessman is also open to buying other Praktiker stores from their owners and recently entered the auction for the 15 stores Austrian DIY group bauMax was selling in Romania. “We wanted to buy some of their stores but because the Austrian retailer wanted to sell all of them together, they chose another buyer,” he added.
However, such market shifts and the overall slow recovery of the DIY sector will not pose competition problems for Praktiker, says its new owner. “There is room for everyone on the market,” concluded the businessman.

How the mighty have fallen

The local DIY market has been through major changes since the start of last year, with OBI closing its local stores and bauMax selling its network to French Adeo only the latest industry news.

The reasons behind these shifts in the market date back to the beginning of the crisis since when, following the collapse of the real estate market, local DIY retailers, most of which are branches of international players, have seen their business shrink. With few exceptions, expansion plans were also frozen.

In response to its poor results, the news broke in July that OBI is to close all seven of its local stores this September, five of which could be taken over by Greek toy retailer Jumbo. OBI, which is part of German retailer Tengelmann, opened its first local shop in 2008 and expanded until 2010. Its 2013 turnover is estimated at EUR 37 million.

While OBI did not manage to sell its entire network, Austrian DIY retailer bauMax announced the same month that all of its 15 stores in Romania would be taken over by French DIY group Adeo. The value of the transaction has not been made public and is now pending regulatory approval from the Romanian authorities. Adeo, which owns several DIY retail brands, is already present locally with a Leroy Merlin store in Bucharest.

Kingfisher, the biggest European home improvement retailer, last year bought the 15 local Bricostore branches from French company Bresson. By mid-2015 the company wants to transform all 14 local Bricostore outlets into the Brico Depot low-cost retail format and even open new shops. Kingfisher representatives said last year that the company wants to grow to 50 branches in Romania over the coming years, despite the fact that the market has been contracting for some time and is showing no solid signs of growth. However, no actual timeline has been offered for reaching the 50-store target.

While international players struggle, local Dedeman, which is owned by Romanian businessmen Dragos and Adrian Paval, has grown to become the leader of the Romanian DIY market. Unlike its international competitors, the company has managed to maintain a steady expansion rhythm over recent years, reaching a network of 36 outlets at the end of 2013. Its 2013 turnover was expected to increase by 8 percent to about EUR 590 million.

In March, Dedeman opened its 37th store in Sibiu following a EUR 13 million investment, and said that another 13 outlets would be opened in the future, three of which would be inaugurated by yearend.