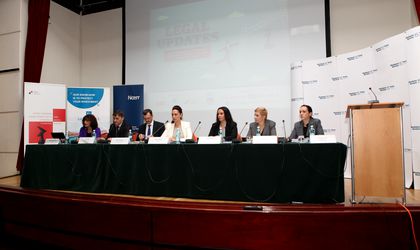 Special provisions regarding M&A deals and public procurement were discussed during a series of specialized workshops, chaired by expert speakers.

The new code, which was passed through government emergency ordinance no.91/2013, aimed to fix various issues such as debtors’ easy access to insolvency procedures and command over reorganization plans. The government claimed the new code would reduce tax evasion, by making it harder for a company to avoid paying its taxes by going into administration.

Under the new code, the term for responding to insolvency requests by creditors and debtors is harmonized at ten days. The regulator has brought in new measures designed to facilitate an insolvent company’s access to finance.

“Given the way in which the insolvency law has evolved over close to the last 20 years, the debtor has become more of a master of the procedure,” said Speranta Munteanu, partner at KPMG.

In addition, reorganization plans will have to be confirmed by creditors holding at least 50 percent of the total receivables.

“The authorities’ desire to curb the manipulations of bad-faith debtors has affected the fair-dealing ones who are trying to recover against the backdrop of a difficult economic environment,” said Simona Maria Milos, president of the National Institute for the Training of Insolvency Practitioners (INPPI) and one of the authors of the new code.

Andreea Deli, partner at law firm Deli&Asociatii, suggested a current creditor having the option to foreclose an insolvent debtor could create a wide array of conflicts both between different types of creditors and between the insolvency practitioner and foreclosure agent.

The authorities have made it harder for a company to go into administration by setting a RON 40,000 threshold (around EUR 10,000) from which a debtor/creditor can start this procedure.

“The idea was that the insolvency procedure shouldn’t be started for insignificant debts, which generates costs and puts an unnecessary mechanism into motion,” said Florin Motiu, secretary of state at the Ministry of Justice.

In his view, the new code should have regulated the insolvency of individuals, as Romania is one of the few remaining EU members that have yet to do so. He suggested that the heavy lobbying of the IMF by the banking sector had blocked this measure. “My personal opinion is that in the near future we will need and have regulation in this field.”

The authorities have also made it harder for a company to avert insolvency by reaching a preventive agreement with creditors. A company teetering on the brink of insolvency has to secure the votes of creditors accounting for 90 percent of the receivables, up 10 percent from the current regulation.

He described as “unreasonable” the shortening of the timeframe for implementing the reorganization plan from three years to one. Tirnoveanu said the US and UK did not have implementation deadlines, while France’s is 10 years.

“A reorganization procedure gets better results than bankruptcy. I doubt we could do the reorganization in one year,” added Elena Cosma, co-managing partner of ZRP Insolvency, during a BR workshop on the fresh provisions in the new code. During the same workshop, Tirnoveanu talked about the insolvency of local administration, following the approval of the government emergency ordinance no. 46/2013.

If the reorganization plan fails, creditors will not take a haircut on their receivables, as has been the case up to now, she added.

The new code, which has been backed by a EUR 336,000 loan from the World Bank, changes the rules affecting groups of firms.

Irina Sarcane, associate partner at Five Advisory Group, said the new code includes provisions on the insolvency of a group of companies.

“One difficulty is that procedures can be opened against two or more companies in the same group, at different moments by different courts. The ideal is to have a common request for opening insolvency procedures,” urged Sarcane. She coordinated the team of experts that worked on the new code.

Romania took most of the measures on group insolvency from Germany, which is Europe’s leading reformer in this regard.

Cross-border provisions haven’t undergone major changes in the new code, but include new EU regulations that streamline the management of this procedure, according to Diana Rizea, senior associate at law firm Noerr.

Aside from the workshops on the new insolvency code, BR also organized two meetings to address the business implications of mergers and acquisitions (M&A), the structure of silent auctions and the new EU Directive on the awarding of public acquisition contracts. New aspects of the civil procedure code regarding foreclosure through garnishment were also outlined to attendees.

Mihaela Nitu, senior associate at the same firm, told the audience about the transfer of employees in the event of M&As, and internal and European regulations in this field, and went onto outline the main phases of the transfer of a company, which means transferring the property from the releaser to the cessionary. “The participants in this process are the releaser, cessionary, employee and legal representatives of the employee,” said Nitu. She added that there are two phases of the transfer of a company that need to be respected: to inform and consult the employees about it and the process itself. “A transfer is not a reason to make individual or collective layoffs. If the transferred employee refuses to take up his or her new job then that employee may be fired for disciplinary reasons. If the transfer involves a significant change in his or her job, he or she has the right to quit,” added Nitu.

Last but not least, Arcadia Hinescu, senior associate at Gruia Dufaut, explained the concepts of restructuring and merger and their influence on contracts, creditors, real estate, authorizations, litigation and invalidity. “A merger is a way of restructuring a company that is in insolvency. The new civil code introduces some new concepts and also deals with issues surrounding mergers,” says Hinescu. In her opinion, when deciding to buy a company one must consider its impact on different aspects of the activity of the company. She also spoke about the regulations that can be applied to contracts, creditors, real estate, authorizations and litigation during a transfer of goodwill and titles and during a merger.

Mihai Macelaru, head of the M&A practice at Noerr, said the silent auction procedure was mainly used by sophisticated sellers, although recently more local entrepreneurs have used it to fully sell a business or attract new investors by selling a minority or controlling stake.

“For instance, the seller thinks the business has reached peak profitability and sees other opportunities, so decides to sell the business and use the cash to invest in other fields. Or the seller can’t support the business alone, and wants to get financial backing or know-how for expansion, which doesn’t require an exit,” said Macelaru, who went through the main stages of this procedure.

Meanwhile, Raluca Botea, senior associate at Noerr, outlined the prospective changes to the local public procurement legislation, following the approval of a new EU directive by the end of the year.

“In Romania an open tender procedure for public procurement is organized most of the time. While up to this year, the most common awarding criteria was the most economically advantageous offer, since January 1, 2013, we have had the surprise that almost all the procedures, specifically those for road and rail infrastructure – big contracts – had as the award criteria the lowest price,” said Botea. Bidders said this was better for them because it reduced corruption.

She commented that the new directive could oblige the contracting authorities to accept the most advantageous offer for certain types of contracts.

Botea also presented the new Public Private Partnership (PPP) draft bill, which was sent to Parliament in September, saying it brings in important changes to the possibility of collaboration between different players. She added that the current PPP law is dysfunctional.

Regarding foreclosure through garnishment, the senior associate says the garnished third party has to disclose the funds or goods to the foreclosing agent within five days under the new civil procedure code. She also presented the provisions on the validation of the garnishment and sums that cannot be touched in this way.