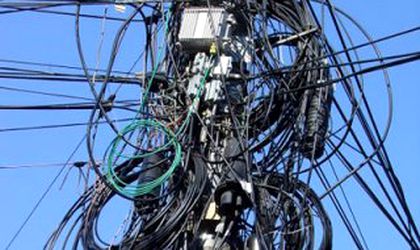 The monthly tariffs levied on the telecom operators renting Netcity infrastructure are identical for all companies, with the difference in final costs residing in the length of the rented backbone. The longer the backbone, the lower the relative costs, said officials of Netcity Telecom, part of UTI.

The Netcity project started in 2008 via a public-private partnership. Bucharest City Hall leased the underground infrastructure for a 49-year term to UTI Systems, in order to set up a support communications backbone to replace the existing cables, which are suspended on poles.

“The financing of the project comes exclusively from private sources, as this is not an investment from public funds. The project is generating revenues for Bucharest in the form of a quota, the value of which has already exceeded EUR 1 million over 2008-2012,” said UTI representatives.

A new conflict erupted at the beginning of March in relation to the Netcity project, this time over the prices that operators have to pay for access to the backbone run by Netcity Telecom. The National Association of Internet Service Providers (ANISP) has complained about what it described as the prohibitive prices charged by Netcity Telecom.

“At the beginning, the tariff an operator had to pay for access to the Netcity network run by Netcity Telecom was EUR 85/kilometer/month. After various taxes became compulsory, such as those for connection, fitting and monitoring, the tariff now amounts to EUR 185/kilometer,” said Mihai Batrineanu, president of ANISP.

UTI officials responded, “The Net City tariffs, agreed with all the operators and representatives of the industry right from the pilot stage of the project in 2009 and 2010, are made up of three categories of products: the rental of the backbone, the rental of the connection equipment and access to the network for installation, fixing and maintenance.”

They added, “As far as the applied tariffs are concerned, we wish to mention the following: under the cession contract, the rental tariffs for the TubeCity service (tubes that allow operators to install the fiber optic) amounts to EUR 85 per kilometer under certain conditions specified in the contract – a five-year contract for two tubes rented throughout the entire backbone.”

ANISP accused Netcity Telecom of charging some operators, such as RCS&RDS and UPC Romania, which pay EUR 7.5 per kilometer per month, preferential rates.

“Concerning the discriminatory tariffs, we wish to point out that Netcity products are public and offered to operators in a transparent way. The rental tariffs were established by the cession contract decided following a feasibility study approved by the General Council of the Bucharest City Hall. Based on this study, Netcity established the offer with which it won the auction to develop the project. The rental tariffs are the same for all operators. The difference in costs for operators is not due to the tariffs but to the length of the rented backbone. The longer the backbone, the lower the costs,” said UTI representatives.

ANISP claims that preferential tariffs will drive small operators out of business and distort competition.

“Netcity Telecom is not impartial and transparent. The operator of the metropolitan network favors some operators while driving others to bankruptcy, via the large tariffs it charges. Ten years since the market was liberalized, we are witnessing a monopoly in the capital,” said Batrineanu.

Eight members of ANISP – GTS Telecom Romania, Ines Grup, Mediasat, Allnet, Digicom Systems, Interlan Internet Exchange Association (which represents the interests of neighborhood networks), Prime Telecom and Idilis – filed complaints with telecom authority ANCOM, and said they are ready to resort to the Competition Council (CC) and even Neelie Kroes, vice-president of the European Commission, to solve the matter.

Regarding this issue, UTI representatives commented that “the CC has ruled the project is not a monopoly. Moreover, ANCOM is studying the Netcity project and will make a decision, based on Law 154 issued in November 2012.”