NEPI to deliver 8,400 sqm office project in Bucharest this summer 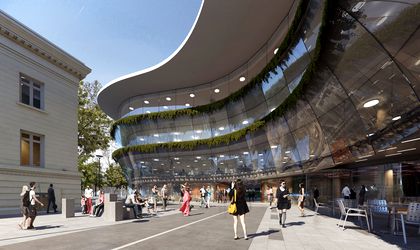 Aviatorilor 8, an office building in Bucharest’s Victoriei Square with a GLA of 8,400 sqm, will be finalized during the third quarter of this year, according to developer NEPI (New Europe Property Investments).

The project, placed near the government building, at the intersection of Kiseleff Boulevard and Paris Street, will have three levels and a parking lot spanning three underground stories with 204 parking spots.

“The defining element of the Aviatorilor 8 project is the architectural design and avant-garde technical solutions. That is what we wanted, to provide an option worthy of the area it’s in, addressing a premium client segment,” said Lori Collin, office executive within NEPI.

At present, construction works are carried out on the final floor, which will be followed by the closing of the facade and roofing and interior finishes.

The office building construction works were carried out along with the nearing Oromolu Mansion refurbishment. The mansion was built by a former Romanian central bank governor, Mihai Oromolu, in 1927 on a 4,500 sqm plot of land and was damaged in a fire in 2009. Both mansion and the plot were evaluated at some EUR 13 million.

NEPI was among the five most active real estate investors in Romania last year, the developer closing the only large retail transaction on the local market, acquiring Iris Titan from Aberdeen.