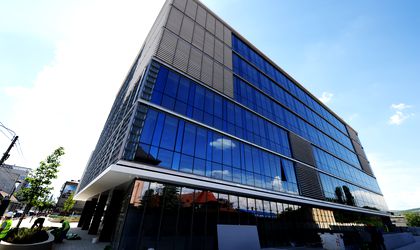 After delivering the first building of The Office, a class A project located in downtown Cluj-Napoca, last week, real estate investment fund New Europe Property Investments (NEPI) and Romanian businessman Ovidiu Sandor are ready to start the second building, which should be delivered in the second half of 2015.

EUR 26 million was invested in the first phase (in 19,000 sqm of built area) from the owners’ own funds and the financing has now been secured to start the second phase (18,000 sqm), said Sandor during the official opening event. The investment in the first building includes the price paid for the land where the former Tricotaje Somesul plant was located. The total project will feature 54,000 sqm and should be completed by 2016.

The Office is not the first partnership between Sandor, shareholder and president of Moda-Tim, and NEPI. The businessman is the developer of the City Business Centre office project in Timisoara which he sold to NEPI in early 2012 for an estimated EUR 90 million.

More than half of the first phase has already been pre-leased, with the largest tenant signed so far being IT company Yardi (which took 3,000 sqm). Tenants also include Deloitte, Three Pillar and National Instruments. Lori Collin, leasing manager NEPI, is confident that the remaining part of the building will be leased by the end of the year given the advanced negotiations with several firms. Moreover, “this will not increase the vacancy rate elsewhere in Cluj-Napoca” as there is a huge demand for office space in the city, added Sandor. This is mostly fueled by companies already present in the town that are expanding their business, but also by new players, mainly from the IT sector, that want to come to Cluj-Napoca.

Cluj-Napoca – the best of the rest

With its key position in the heart of Transylvania, a large and well trained labor force, good infrastructure and attractive occupancy costs, Cluj-Napoca, Romania’s second largest city, has also grown to become the second most attractive hub after Bucharest for BPOs and SSCs. As a result, the town has the second largest office market in the country. Cluj-Napoca’s office market is looking at considerable growth in terms of new stock with four office projects totaling more than 50,000 sqm to be delivered by yearend. In addition to The Office, this year should also see the delivery of United Business Centre Tower (10,000 sqm) from Iulius Group, the second phase of Liberty Technology Park (13,400 sqm) by Fribourg Development and the second phase of Cluj Business Center (8,000 sqm) from Felinvest, according to JLL data.

But Sandor says he is not concerned about the competition. First, he commented, there is growing demand for office space in the city and second, The Office, due to the new concept it brings to the local market, its size and location “is and will remain for at least several years the prime office destination in Cluj-Napoca”. Rents are from EUR 13-15/sqm/month.