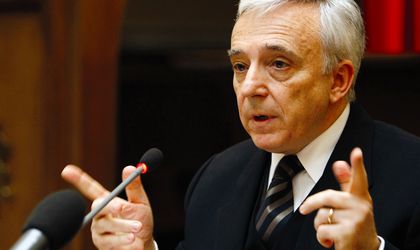 The new estimates include the Fiscal Code amendments brought by the October emergency ordinance.

“Without the impact of the VAT rate reduction in round I, the forecast inflation rate would reach 2.1 percent at the end of the year and 2.7 percent in 2016“, Isarescu said in a press conference presenting the quarterly inflation report.

He said that the annual inflation rate is anticipated to stay within negative values ​​until May 2016 and return to positive territory later, but stay below the lower limit of the interval BNR is aiming for, which is 1.5 percent.

The annual inflation rate is expected to re-enter within the range in 2017.

“Either consumers or entrepreneurs, intermediaries have not yet seen deflation in Romania, even if they see a drop in prices, the CPI in negative territory comes from a tax measure. So far, there is no psychology of deflation, the population is buying, investments are being made, demand is increasing and the public believes that after a certain period of time this moment will pass and inflation will fall within the target we are aiming for,” said the head of the BNR.

BNR had revised in August its forecast for annual inflation rate to -0.3 percent for the end of this year and to 0.7 percent by the end of next year, down by 0.5 percentage points and 1.2 points respectively from the earlier projection, while expecting it to enter the target interval in Q1 2017.