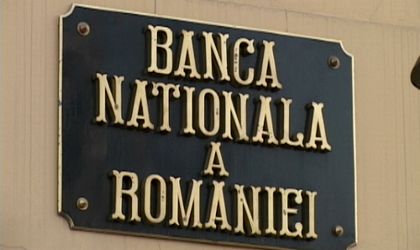 The National Bank of Romania (BNR) Council of Administration (CA) decided for the second consecutive meeting to maintain the key interest rate at 1.75 percent per year and the reserve requirements for banks’ liabilities to 8 percent for RON and 14 percent for foreign currency, shows a BNR statement.

Most analysts had anticipated BNR’s decision, pending clarification of the situation on the new Fiscal Code. The package of fiscal measures will be reviewed by Parliament at the end of this month in an extraordinary session after being sent back by President Klaus Iohannis.

BNR governor Mugur Isarescu said in June that the central bank will not reduce interest rate, in terms of negative rates of inflation and economic growth of about 4 percent this year.

“The BNR CA reaffirms that its decisions are aimed at ensuring price stability in the medium term in a way that supports economic growth in a sustainable macroeconomic framework, while preserving financial stability. For this reason, the fiscal package to be applied in the next period should not endanger macroeconomic stability, which is a particularly important public asset and on which favourable perception of Romania depends,” shows the press release.

BNR stated that it continuously monitors domestic developments and the international economic environment for the use of all instruments at its disposal to reach its primary objective of price stability in the medium term and to maintain financial stability.

The central bank noted that globally the recent period is characterized by a still modest recovery in economic growth and an increase in volatility in international financial markets amid the persistent uncertainties surrounding the Greek situation, economic developments in China and monetary policy divergence of the main central banks in the world. Internally the pending implementation of a series of fiscal measures (tax cuts package measures and new wage law) will have a direct impact on macroeconomic stability and on the economic policy mix agreed upon with international institutions.

The National Bank plans to take a more cautious approach to monetary policy, to offset lax fiscal policy measures and in the context of strained relations with international lenders, given that at the end of September the agreements with the IMF, the European Commission and the World Bank expire, and partnerships may not be prolonged.

Analysts expect the key interest to be kept at 1.75 percent until the end of the year, while next year the views range between a decrease to 1.5 percent and an increase to 2.5 percent. Regarding reserves, they consider that denominated liabilities could be reduced to 6 percent in December, while those in foreign currency to 12 percent.