Movie Review: Once Upon a Forest (Il etait une foret) 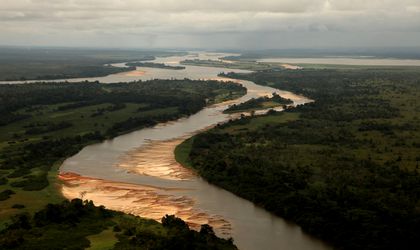 Sitting in the cinema watching Once Upon a Forest, a 78-minute documentary by French director Luc Jacquet, the air suddenly feels cleaner and fresher. Such is the impact of the mise-en-scène of this visual love letter to the sylvan world, that even a committed urbanite will be seduced by the rustling leaves, thundering waterfalls, delicate dewdrops and brisling bark.

Jacquet is best known for March of the Penguins, the 2005 movie sensation that charmed the world and netted the director an Oscar. That documentary could not go far wrong, both because of the epic and emotional journey everyone’s favorite flightless bird embarks upon every year, and, well, because penguins are so cute.

Despite providing us with our oxygen, trees are not quite as cute as penguins. Nor do they really do much (or so you might think). Once Upon a Forest, then, doesn’t tug on the heartstrings in the same way as March of the Penguins; nor does it have much of a narrative arc.

But that doesn’t stop it being beautiful and remarkable. The majority might not find forests as watchable as penguins, but one person does: French botanist Francis Hallé, who stars in the film (though he would probably argue that the real stars are the trees).

Morgan Freeman did the voiceover for March of the Penguins and Jacquet could have had a big name or Hollywood hottie tramp around the rainforest in Peru and Gabon to ramp up the box office. Happily he didn’t. Hallé is the understated, serious presence that speaks of a lifetime’s quiet devotion to his field, and he traverses his domain respectfully, creeping amid boughs and sketching from branches.

Meanwhile, Michel Papineschi’s voiceover describes phenomena that, while not approaching the drama of a lovelorn bird waddling miles to reach its mate, are very impressive. For example: the tree that, when a predator approaches (in this case a lumbering elephant), is able to emit a toxic smell, repel the unwanted advance and warn other trees. Something to think on when you’re wandering the linden-permeated streets of Bucharest at this time of year.

Nature’s complex symbiosis is another source of fascination: some trees harbor ant colonies which they deploy to see off other insects intent on feeding on their foliage. As with this expansive type of documentary that takes on vast realms like the sea or the sky (David Attenborough’s output springs to mind), the infinitesimal actions and interactions reveal a whole other world.

The movie is not without its message. Despite their life-facilitating properties, serenity and prettiness, humans are as horrid to trees as they are to the rest of the flora and fauna that share the planet. There are sobering scenes of piles of trunks felled by loggers, and ominous warnings about deforestation.

But the moralizing doesn’t mar the movie, and with the power and beauty of the forest set out so convincingly, the argument for conserving it is compelling and justified.