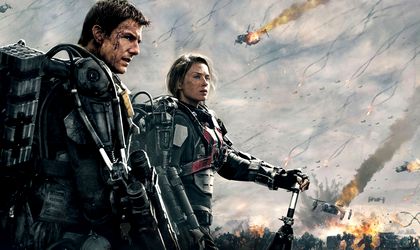 Time travel would certainly explain why Tom Cruise, now in his second half-century, still looks about 35. Doug Liman’s sci-fi thriller gives him this ability, making Cruise’s character live the same day over and over in a bid to – what else? – save the world.

Earth is under attack from aliens. Not dopey ones, that Will Smith could knock out with one punch, but smart “mimics”, with a capacity to “reset” the day repeatedly, so they can work out our battle plan and thwart us. Remember in Groundhog Day, when Bill Murray used the time loop he was stuck in to build up an encyclopedic knowledge of Andie MacDowell so he could get her into bed? Well, these aliens are doing the same thing but with the goal of world domination rather than seducing a hot TV producer.

Into this cauldron comes hapless Officer Cage (Cruise), a shallow adman whose televised blandishments have been used to recruit more cannon fodder for humanity’s war effort. For trying to blackmail his way out of filming propaganda on the battlefield, cowardly Cage finds himself unceremoniously demoted and dispatched to the frontline to kick some alien butt.

One of the rules of Hollywood – that in a war you will probably survive unless you make the mistake of showing another soldier a photo of your sweetheart back home – is swiftly broken, as rookie fighter Cage is fatally injured in combat. But as he lies dying, some acid from a stricken mimic seeps into his bloodstream, endowing him with the enemy’s ability to start the day again – and over time fine-tune his tactics.

The premise is appealing, if not original. As well as the classic Groundhog Day, the time-loop conceit was employed recently (and militarily) in 2011’s Source Code, where wounded pilot Jake Gyllenhaal used a similar trick to hunt a terrorist, and 2013’s saccharine fest About Time. By now we’ve all seen the time traveler win over the skeptic by accurately predicting who’s about to phone up and detailing the biography of a random passer-by.

But Edge of Tomorrow rises above its unoriginal basis. With apt timing, given the recent D-Day anniversary, the Normandy beach scenes are strikingly rendered (especially in 3D), conveying the carnage and chaos of war. Comic relief and good one-liners punctuate the action sequences.

But the biggest surprise is how progressive the movie is. Cruise has an attractive younger co-star (Emily Blunt). No surprise there. It would normally be her job to be saved, try and dissuade Cage from acts of heroism and look very concerned. Not here. Blunt’s character, fellow soldier Rita Vrataski, is more than Cage’s equal; indeed, she spends much of the film instructing him in the art of combat.

This refreshing spin on a fun, but derivative, idea, combined with Cruise’s star quality, an impressive Blunt, good chemistry between them and a deft script, gives what could have been hackneyed multiplex fodder a real edge.