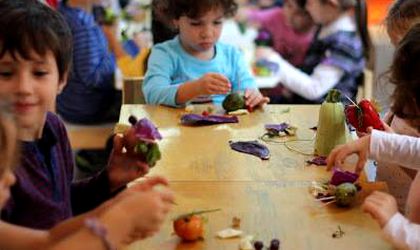 Private schools are a flourishing business in Romania because they meet an acute market need, believes Ana Maria Brezniceanu, founder of Montessori School of Bucharest and receiver of the November 2015 US Embassy “Entrepreneur of the month” award.

Brezniceanu started the Montessori Kindergarten in Bucharest in 2007 and at the time it was the first of its kind in Bucharest to be authorized by the Romanian Ministry of Education.

“This kindergarten was started with borrowed money”, said Brezniceanu at the conference where she received her award from US Ambassador to Bucharest Hans Klemm.

In Romania almost 50 percent of entrepreneurs self-finance when starting their business, using money put aside while being employed, according to a 2014 survey from the Banca Romaneasca.

Initially Brezniceanu’s school had only eight students in one kindergarten group; it has now grown to eight groups of children aged between two and twelve. “Each growth took effort because in order to open a new group/class it is necessary to send a teacher to the Montessori course”, stated Brezniceanu.

The Montessori method emphasizes the potential of the young child and develops this potential by using specially trained teachers and special teaching materials, according to the Montessori School website. The employ of the method is relatively limited as an alternative to traditional education in Romania. The Association for the Development of Montessori Education in Romania (ADEMR), affiliated with the Association Montessori Internationale (AMI) created by Maria Montessori, lists only eighteen kindergartens and schools throughout Romania that have teachers trained through AMI courses.

Unlike the Waldorf and Step-by-Step methods that “have a longer tradition in our country and are already well-known, especially since they first entered the public sector”, when Montessori first started, “the parents we came in contact with didn’t know much about the Montessori education”, said Brezniceanu. “Now parents come informed also because more Montessori kindergartens have opened and they all have explanations on their websites,” she commented. Moreover, “ADEMR organizes conferences for parents and the Montessori method has become considerably more visible”, she added.

Of the Montessori School’s development since 2007, Brezniceanu said that “each growth [in size] was organic, following demand from the parents”. As for the school’s prognosis for the next years, she intends to grow the business along with the children, adding another class for 6-9 years old, another for 9-12, and to open a new school for the next school cycle, twelve to fifteen year olds, when the current 9-12 year olds graduate. “I prefer to thoroughly take care of each child, to be able to talk to each parent, to get to know and understand each other”, she commented.

Asked about the pricing of the Montessori School, Brezniceanu said that the taxes vary according to schedule type, number of siblings enrolled and payment method (monthly/term/yearly). “I am trying very hard to keep the tuition fees at a level accessible to the middle class”, she stated.

Through the “Entrepreneur of the month” award, the US Embassy aims to highlight those individuals who “have seen the potential of a new or emerging business idea or opportunity, and then developed a focused approach with drive and courage to turn that idea into reality”, stated the ambassador. “The purpose was to help inspire other entrepreneurs in Romania, but then also to create a bond between those entrepreneurs and the United States”, which could eventually lead to “opportunities for those entrepreneurs to do business in the United States”, further added the ambassador.