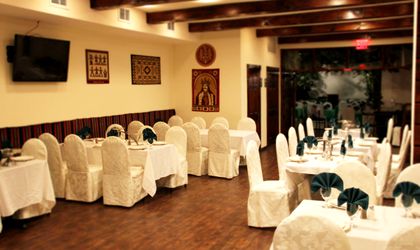 “A Restaurant in Brooklyn Offers the Food and Feeling of Moldova” is the description which journalist Andrew Cotto uses for Moldova Restaurant, whose owner Radu Panfil opened it in July 2012.

The menu at Moldova is a tribute to Balkan staples: hearty soups, smoked and fresh fish, grilled and braised meat, stuffed cabbages. Cornmeal appears often, most treasured in the side dish known as, yes, mamaliga, a distinctly Eastern European take on polenta, served alongside grilled house-made sausages, peas and onions.

According to the article, Moldova is a largely rural nation once known as the garden of the Soviet Union. It also is considered the poorest country in Europe and has one of the highest emigration rates in the world, particularly since the collapse of the Soviet Union in the early 1990s. Of the tens of thousands of Moldovans who have arrived in the United States since then, relatively few have ended up in New York. One immigration organization estimates that there are around 5,000 Moldovans in the city of New York.

The entire review can be read here.

The restaurant official website is here, while the location is 1827 Coney Island Ave, Brooklyn, NY11230.