Mobius: Rid Romania of red tape and regulation, bring on the Euro 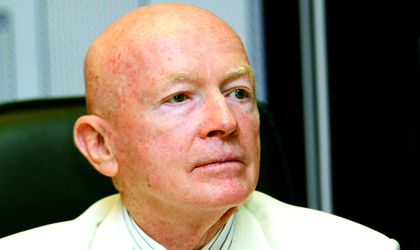 What legislation does Romania need to put in place in order to increase the yield of the Property Fund?

Actually Romania needs less legislation and fewer laws. What is needed is more implementation based on a clear set of goals to increase investments and employment with aggressive leadership determined to reach those goals. I’m writing this in India where I am visiting companies. At one company I visited officials told us about their plans to build a plant in Eastern Europe. Trying to promote Romania I asked them if they had considered Romania as a plant site.

They said, yes, they had visited a number of countries including Romania. In Romania they said they had found a lot of bureaucracy and in their words, “It was a lot like India!” Various government departments suggested land sites for their plant but none met their simple requirement of a rectangular piece of land. The number of licenses required and government departments they had to obtain permissions from was overwhelming.

In contrast, when they visited Hungary, they were able to deal with one government department which quickly located appropriate pieces of land that met their requirements from which to choose. The amount of bureaucracy was at a minimum. They have decided, therefore, to invest in Hungary. This will mean millions of dollars going into Hungary and the plant will probably employ 5,000 workers. Romania therefore missed out on a great opportunity.

Why do you think listings of companies on the Bucharest Stock Exchange are prone to failure?

Because they are led by managers who are not capable of building and growing their companies. At private companies shareholders do not have the power to replace the management so nothing changes. At government-controlled companies the appointments have been made on political and not professional criteria. How can you appoint a person to head an electric power company who has absolutely no experience in electric power? Of course, the company is likely to fail.

Has the US exited recession? What about Europe?

Is the current stance of the US on China fair?

China/US relations are varied and wide ranging. In most cases the relationship has been positive. In some cases, the Chinese feel that the US is trying to restrict them and hem them in. I would not say the attitudes on both sides are “fair” in many cases since nationalist tendencies are at play.

Should Romania join the Euro zone in 2015?

If they qualify then definitely yes. Joining the Euro zone will be positive for Romania’s economy and will impose clear discipline on government spending.

Do you think we are seeing a bubble in the bond market?

Not yet. Although interest rates have come down there are lots of doubters so the market is not moving in one direction.